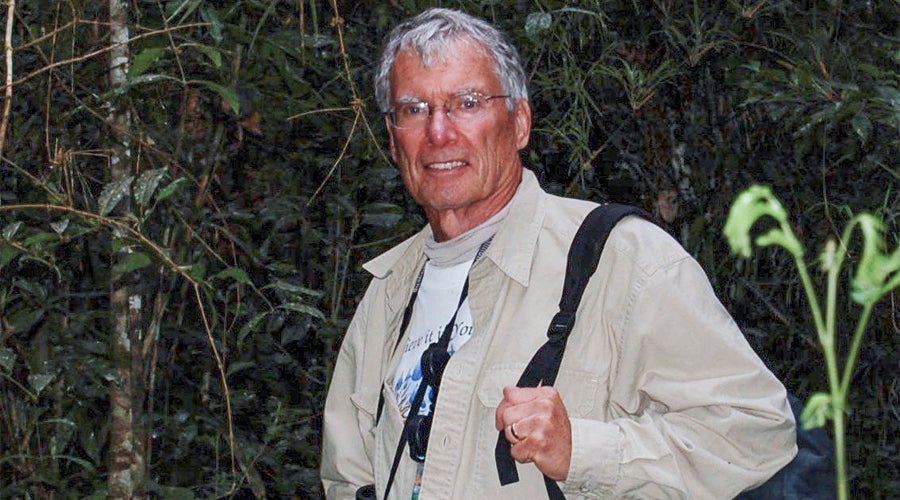 John Holloway, emeritus professor of chemistry and geology in Arizona State University's School for Molecular Sciences and world-famous experimental petrologist, died on Sept. 6, in Medford, Oregon. He was 77.

Born in 1940 and a native of Klamath Falls, Oregon, Holloway became interested in volcanoes at an early age, influenced by Mount Shasta not far away. Following a stint in the military, he was educated in geology at the University of Oregon, Eugene.

He went on to earn a doctorate in geochemistry at Penn State University with Wayne Burnham. There Holloway published, with Burnham and others, a series of groundbreaking papers on the properties of water at high pressures and temperatures.

Holloway came to ASU as part of an effort to combine the research fields of chemistry and geology, continuing an effort begun by Leroy Eyring in the chemistry department. Holloway started full time in 1969.

After a sabbatical spent at the Carnegie Institution of Washington's Geophysical Laboratory in its high-pressure laboratory, Holloway began to build an innovative and highly productive experimental program in high-pressure research. He trained many students who have gone on to excellent professional careers inspired by his imagination and knowledge.

Paul McMillan, now at University College London, recalled, "I arrived at John's lab in 1978, fresh from an undergrad degree in chemistry at the University of Edinburgh. I had never flown before. John met me at the airport in sandals, T-shirt, and cut-off jeans. I had been expecting a more traditional professorial look. John did not suit ties well." John Holloway in the lab, mid-1980s. Photo by Daniel Vierzeuf

He added, "His lab at ASU was a remarkable maze of high-pressure lines and vessels snuck into corners, but it all worked to generate some interesting results relevant to deep crustal and mantle mineralogy, petrology, and geochemistry."

As Holloway's Depths of the Earth (DotE) laboratory became established, it served as a waypoint for a continuous stream of students, postdoc researchers, and visitors from around the world. "DotE" became a significant part of the careers of many scientists, due to Holloway’s characteristic openness to new ideas and new people.

Holloway was patient with students, and it paid off. Said McMillan, "It took me a very long time to understand and engage in any problems that had relevance to earth science research, but he was happy to let me develop my own brand of mineral spectroscopy."

Holloway also helped students establish themselves professionally. Said McMillan: "He was the one who suggested I should try for a faculty position at ASU, and he organized a dinner with the department chair to bring up the possibility. I owe him for this opportunity to start my career."

In addition to his academic work, Holloway helped to found, with ASU colleagues John McNerney and Peter Buseck, the Jerome Instrument Company. Based in the abandoned high school gymnasium in the dusty Arizona ghost town of Jerome, JIC manufactured an environmental mercury sensor, still the primary mercury detection system in use today.

"Although it was a sideline to his faculty work," said Buseck, "in many ways John enjoyed the JIC adventure as much as his academic research and career."

After the Jerome Instrument Company was sold in 1986, Holloway started another business, Depths of the Earth, Inc., selling high-pressure devices. McMillan noted, "In the field of high-pressure equipment, the bench-top piston cylinder device he designed and built with Ned Patera has revolutionized access to high-pressure experiments by research groups worldwide."

Toward the end of the 1990s Holloway's research interests turned toward biology. He began undertaking experiments to determine the origin of life-forming organic compounds, and the survival of microorganisms in "black smokers," thermal springs on the ocean bottom. This work included a trip to the ocean bottom in the deep-diving research submarine Alvin, along with the development of massive laboratory vessels to simulate the heat and pressure found in black smokers.

During his tenure at ASU, Holloway led many adventurous field trips to volcanic localities around the continent — a favorite locale being the San Carlos volcanic field in Arizona.

Before retirement, he took a final sabbatical year and did research at the University of Botswana and for DeBeers in Johannesburg and Kimberly, South Africa. The second half of the sabbatical was spent at Hebrew University in Jerusalem, Israel. There he did research with a former Caltech colleague. He also gave talks in Cairo and traveled to the western deserts of Egypt to examine the unusual stone and rock formations there.

John Holloway retired from ASU in 2007. Said Peter Buseck, "John was our very good friend, as he was to many others. He was also often a welcome co-conspirator against administrative things of various sorts with which we disagreed. We will all miss his joy, laughter, and good spirits as well as bright mind and willingness to help anyone who asked."

After retirement, Holloway and his wife, Helen Rosen, traveled to Japan, where John had a six-month appointment from Kyoto University to do research in both Kyoto and Beppu, Japan. He also gave talks throughout the country. On returning, he and Rosen moved to Ashland, Oregon, where he taught geology classes for the Osher Lifelong Learning Institute. They both spent much time hiking and camping in the Pacific Northwest.

Rosen said, "His smile brought sunshine to any room he entered. No one could keep up with him when he began walking, and while hiking, it was impossible. But what John loved most was dancing which he did a lot of both in Tempe and wherever we were in the world and the opportunity arose. In short, he truly loved life and will be sorely, sorely missed by me and many others."

In 2012, John Holloway was officially diagnosed with Alzheimer’s. Helen explained, "He remained at home for two years until I could no longer care for him. In September 2014, I placed him in a memory-care facility in Medford, Oregon, where he passed away on September 6, 2017."

Note: Many thanks go to those who contributed memories and photos of John Hollloway through a memorial Facebook page, and a large Thank-You in particular goes to Helen Rosen, Kurt Leinenweber, Peter Buseck, Paul McMillan, and Gordon Moore for sharing their memories of John Holloway.