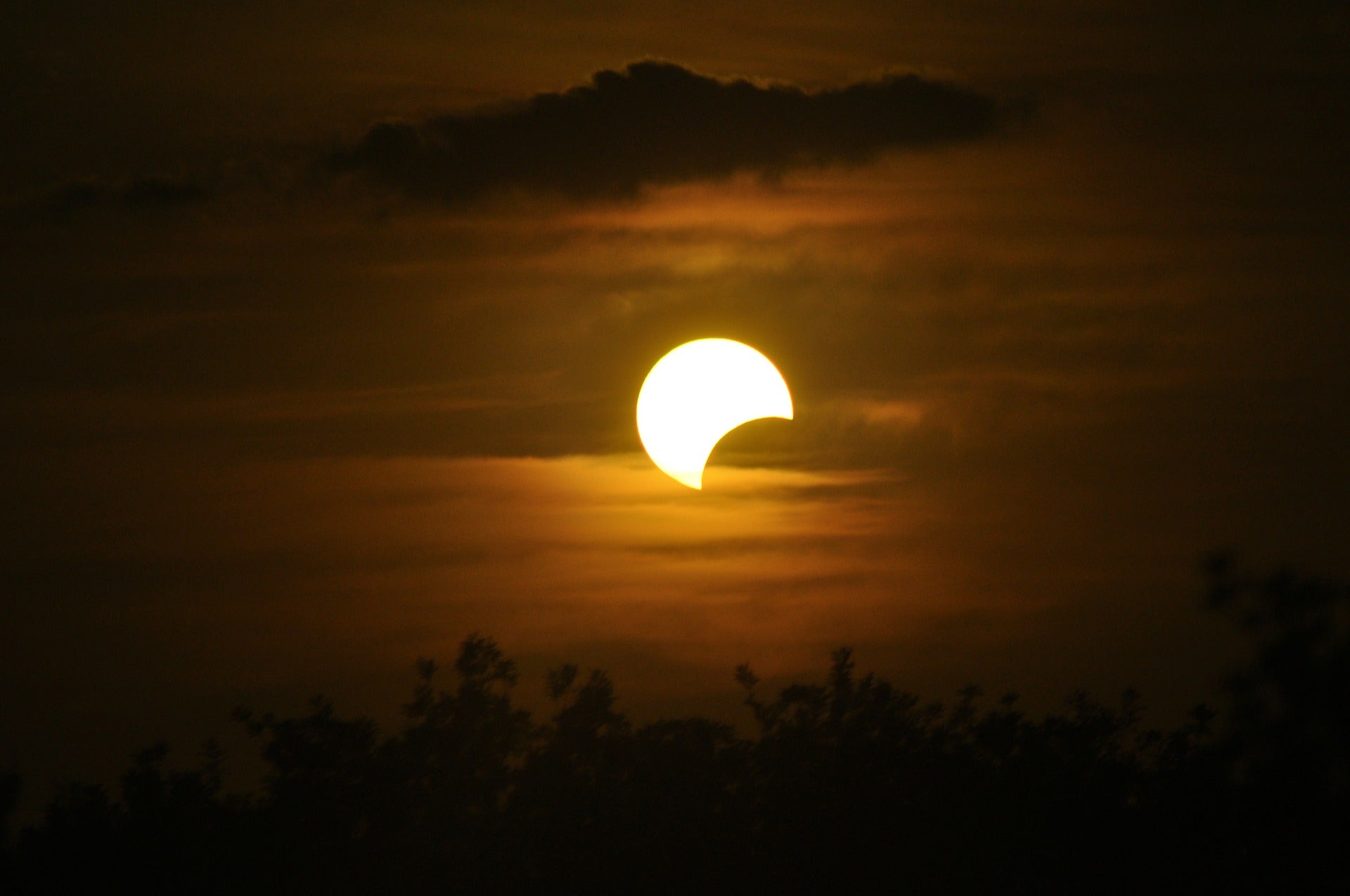 If, like Mick Jagger and the Rolling Stones, you want to see the sun blotted out from the sky and painted black, then you are in luck. Your wish will be granted Monday when the first coast-to-coast total solar eclipse in 99 years will occur.

Total eclipses are rare. While the entire population of North America will be able to see a partial eclipse, only those in a 70-mile-wide curved strip from Oregon to the Carolinas will see the sun completely blotted out by the moon.

For those without the time to drive to Wyoming, drive to Tempe instead. Arizona State University’s School of Earth and Space Exploration is hosting a free eclipse-viewing celebration on campus with solar telescopes and solar-safe viewing glasses (more details at the end of this story).

Here's a look at some interesting facts about eclipses — along with some thematic titles for your eclipse-day playlist.

'Total Eclipse of the Heart' Sight unseen, the Great American Eclipse has already captured the hearts and imaginations of fans everywhere. Those fortunate to have already witnessed an eclipse of this magnitude say viewers should prepare for a deeply moving experience. Astrophysicist Patrick Young can testify to the spectacularity of a total solar eclipse:

“I was fortunate enough to see a total eclipse in Europe in 1999, and words can't do justice to the experience of totality. The moon will cover part of the sun's disk. It will get noticeably darker if there is a reasonable amount of coverage, and it's an impressive thing to see with proper eye protection,” Young said.

“For those in the path, in the instant before the moon covers the sun completely you'll see the diamond ring effect, where the sunlight shines through gaps between mountains on the lunar limb. Everything changes at totality. It will be much darker. Many people can feel a temperature drop. The wispy solar corona will extend several times the sun's size into the surrounding sky. With luck or a small telescope or binoculars, you'll be able to see bright pink prominences near the limb.”

Young, an associate professor in ASU’s School of Earth and Space Exploration, will be among the scientists traveling to Idaho to witness the totality of the eclipse in all its splendor.

'Bark at the Moon' The awesomeness of an eclipse has long spun tales of enchantment and sensation. An inexplicable occurrence in ancient times, an eclipse would often trigger bewilderment and fear for those in its path.

“In general, an eclipse was considered a great portent by ancient peoples, signaling some kind of omen on the part of the gods,” said Matt Simonton, assistant professor of ancient history in ASU’s School of Humanities, Arts and Cultural Studies. “Usually it was thought to be bode ill, and could significantly impact even life-and-death matters.”

Simonton notes that some, like Alexander the Great, rendered obedience to eclipses in the context of a religious phenomenon and responded with appropriate ritual action such as sacrifice.

“Humans have long interpreted the information they read in the night sky in relationship to their work, usually in agriculture, on the Earth, and to their royal genealogies and cultural histories,” said Joni Adamson, a professor of environmental humanities in the Department of English and director of the Environmental Humanities Initiative at the Julie Ann Wrigley Global Institute of Sustainability. “They have long tracked the movement of the sun, moon and stars in relationship to the seasons and the weather. This is the reason why Venus, for example, is associated with agriculture (she/the planet is in the sky for six months in spring and summer and she absent for fall and winter).”

Such events became part of a people's history. A solar eclipse, or a bright bursting star, would be memorized as part of the history of a king or queen’s reign and passed down in the oral tradition to succeeding generations, Adamson said. Anne Neville, the wife of British monarch Richard III, died on March 16, 1485 — an eclipse day according to NASA’s log of 15th-century eclipses. Some believed Neville’s death on the day of the eclipse was an omen of her husband’s controversial reign. There are, however, a great number of historians who say Neville probably died of tuberculosis.

Beyond almanacs and histories, in science fiction eclipses often serve as a way to reveal humanity’s place in the cosmos. Ed Finn, founding director of ASU's Center for Science and the Imagination, cites Isaac Asimov's short story “Nightfall,” about a civilization that lives in permanent sunlight. Every 2,000 years the civilization collapses because of a cyclical total solar eclipse. A team of scientists prepare themselves for the coming darkness, but they did not predict the impact of seeing millions of stars for the first time, a sight so overwhelming that they succumb to madness.

“The story illustrates how powerful a change of perspective can be, reminding us of the palpable reality of bodies in space and also the incredible vastness of the universe over our heads,” Finn said.

With apologies to super fans of Pink Floyd, there isn’t really a “dark side of the moon” as the title of the classic rock band’s 1973 album suggests. That’s because one side of the moon is always lit by the sun; it’s just not always the side that’s facing the Earth. However, '80s music fans will have reason to celebrate Duran Duran’s 1984 pop hit “New Moon on Monday” because the moon must be in its new-moon phase for a solar eclipse to occur. And this year that special eclipse new moon will happen on a Monday, Duranies.

The fact that total eclipses occur at all is due to a cosmic coincidence, said ASU astronomer Jenny Patience.

“The width of the sun is about 400 times larger than the width of the moon, but the distance to the sun is also about 400 times farther than the distance to the moon, so both the moon and the sun appear to be the same size on the sky from Earth,” Patience said. “During an eclipse, the sun, moon and Earth are aligned such that the shadow of the moon falls on the Earth. This alignment only rarely occurs. Often the shadow of the moon is above or below the Earth. The next solar eclipse visible in Arizona will be in 2023.”

According to NASA, solar eclipses only occur if the moon “is located within 0.5 degrees of the plane of the ecliptic, on a line that passes through the center of the sun and the Earth. The moon travels along an orbit that is inclined by five degrees to the ecliptic plane, so there are only two opportunities each month when it passes through the plane of the ecliptic” at points called the ascending and descending nodes. Eclipses of the sun, according to NASA, only occur if the new-moon phase is near one of these nodes, which is why there is not a solar eclipse with every new moon.

Patience, who is an associate professor in the School of Earth and Space Exploration, specializes in the study of exoplanets, planets outside our solar system. Eclipses also occur around other stars, she said.

“Using telescopes to search for those distant eclipses is one way that exoplanets are discovered in orbit around other stars,” she said.

'Fly Me to the Moon' Students from ASU’s NASA Space Grant program will be in eastern Wyoming to track the eclipse during its path of totality. Led by Professor Tom Sharp of ASU’s School of Earth and Space Exploration, the students will team up with Embry-Riddle Aeronautical University and the group Arizona Near Space Research to launch high-altitude balloons to view the eclipse.

“My team of students has designed and built a payload for measuring weather effects and imaging the thermal effects of the eclipse,” Sharp said. “We will be flying a thermal and visible-light camera for imaging the moon’s shadow and the eclipse’s effect on ground temperature and in the atmosphere.”

The student-led project is a first for tracking a solar eclipse. Sharp says the students came up with the plan for their experiments and designed the payload structure, electronics and sensor rays to make the planned observations and measurements. NASA will also be live-streaming video from other space-grant balloon projects taking part in the experiment all across the country. Like a great number of eclipse chasers across the country, ASU students participating in the high-altitude experiment in Wyoming will be camping under the stars — and the moon — for the Great American Eclipse. Lodging in the eclipse’s path of totality is next to sold out in many towns across the country, and many local merchants are banking on the 2017 eclipse to boost business in small towns.

'Staring at the Sun' For those unable to travel out of state to witness the eclipse in its path of totality, ASU’s Tempe campus is opening up Hayden Lawn and the Interdisciplinary Science and Technology Building IV to the public. Join the Sun Devil community in staring at the sun in its partially eclipsed state through solar telescopes and free ASU solar-safe viewing glasses — while supplies last.

A note about viewing: Experts constantly remind us that we should never look directly at the sun during an eclipse without protective eyewear — and regular sunglasses won’t cut it. NASA recommends eclipse glasses that meet a particular standard, ISO 12312-2, which provides the protection your eyes need from harmful light.

Have questions on the day of the eclipse? Experts also will be on hand at ASU on Eclipse Day 2017 to answer them.

Celebrate the Solar Eclipse at ASU

What: ASU's School of Earth and Space Exploration is hosting an eclipse-viewing experience with solar telescopes, solar-safe viewing glasses, live NASA coverage of the event and interactive displays.
When: 9 a.m.-noon Monday, Aug. 21.
Where: Hayden Lawn or in Interdisciplinary Science and Technology Building IV on ASU's Tempe campus.
Admission: Free. A limited number of eclipse glasses will be available for free as well.
Details: https://asuevents.asu.edu/content/celebrate-solar-eclipse-asu?eventDate=2017-08-21T09%3A00