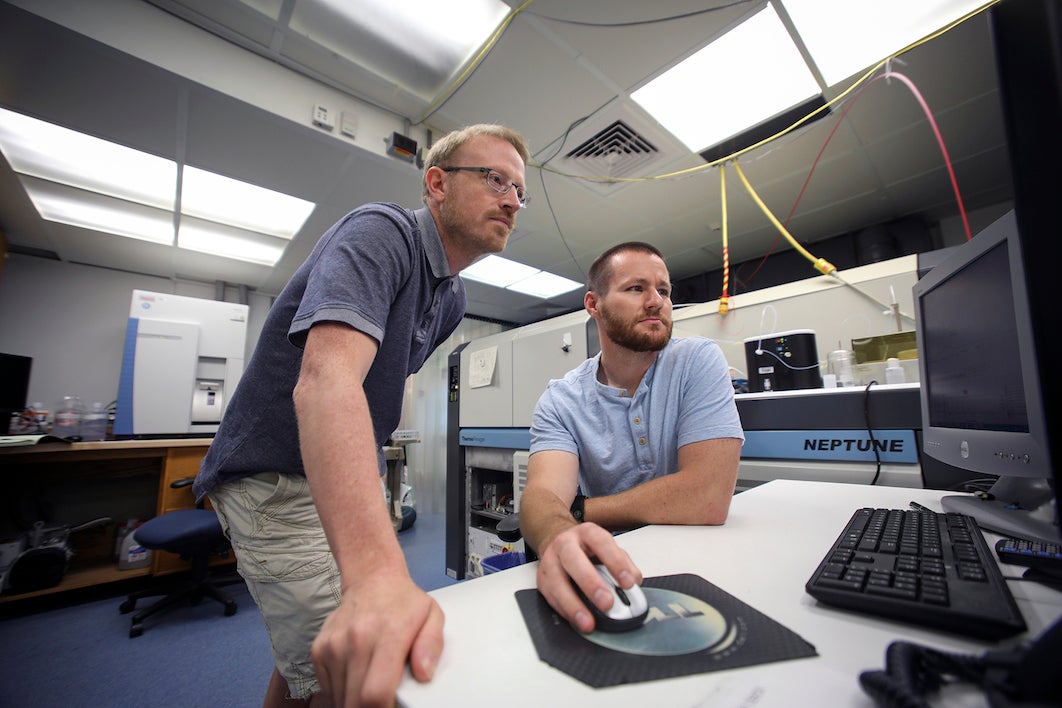 A loss of oxygen in global ocean seawater 94 million years ago led to a mass extinction of marine life that lasted for roughly half a million years.

Scientists have found several potential explanations for how the loss of oxygen happened. These could include enhanced volcanic activity, increased nutrients reaching the ocean, rising sea levels, and warming sea and surface temperatures. But to point a finger at any one cause (or several of them) requires knowing how fast the oxygen loss happened.

A new technique, developed by Arizona State University graduate student Chad Ostrander (pictured above, right) with colleagues at Wood Hole Oceanographic Institution (WHOI) and Florida State University (FSU), has put a timetable on the oxygen loss associated with this major ocean extinction event, which is known to science as Oceanic Anoxic Event 2.

Their research was published today in the journal Science Advances.

"The project began when I was an undergraduate Summer School Fellow at Woods Hole," said Ostrander, a doctoral student at ASU's School of Earth and Space Exploration. His co-authors on the paper are Jeremy Owens at Florida State and Sune Nielsen at Woods Hole.

"We were able to track changes to the oxygen content of ancient seawater by measuring isotopes of thallium in ancient seafloor sediments," Ostrander explained. "Since the oxygen in the rocks we measure wouldn't really give any valuable information, we use thallium and other elements as stand-ins, or proxies." This exposure of sediments in Italy includes a record in the black shales (dark diagonal layers) of the 94-million-year-old Oceanic Anoxic Event 2. Although these shales were analyzed by the team, the ocean-oxygen study focused primarily on core samples taken at sea because they preserved better the chemical evidence for ancient oxygen loss. Photo by Jeremy Owens/Florida State University

Sediments preserve the thallium isotope composition of seawater, which changes depending on the amount of oxygen in the deep ocean at the time they were deposited. The sediments pile up over time, with deeper levels corresponding to times further in the past.

The sediments the team studied were organic-rich black shales collected as core samples by deep ocean drilling in 2003. The site was the Demerara Rise, a submarine plateau in the Atlantic Ocean off the coasts of Suriname and French Guiana.

"We dissolved the rocks in our lab," explained Ostrander, "and then chemically separated everything but thallium, the element we needed for analysis."

Then using mass spectrometry, the team measured variations in thallium within sedimentary rocks as a proxy for changes in oxygen levels over tens of thousands of years.

Based on the analysis, the researchers suspect that up to half of the deep ocean had become oxygen-depleted during Oceanic Anoxic Event 2, and remained so for about half a million years before it recovered.

The primary cause of Oceanic Anoxic Event 2 may have been increased nutrient delivery to the oceans, the researchers said. An increase in nutrients fuels the production of organic matter, and subsequent remineralization by bacteria feeding on it.

"It's this remineralization that is specifically responsible for the oxygen loss, because these bacteria consume oxygen in order to oxidize the organic, or carbon-bearing, matter," Ostrander said. "We see a similar scenario in the modern ocean, again due to increased nutrient delivery, but largely driven by fertilizers used in farming."

In fact, he said, "the largest 'dead zone' observed in the Gulf of Mexico is occurring right now for this very reason." Adding nutrients to the ocean causes increased production of organic matter such as phytoplankton. When these die, they sink to the bottom as "marine snow" and decompose, consuming oxygen in the process. This is thought to be primarily responsible for large-scale oxygen loss in ancient oceans, leading to mass extinctions in the marine environment. The modern ocean exhibits similar symptoms. Image by Natalie Renier/WHOI

The researchers draw a distinct parallel between the rate of deoxygenation back then and modern trends in oceanic oxygen loss.

Said co-author Nielsen, "Our results show that marine deoxygenation rates prior to the ancient event were likely occurring over tens of thousands of years, and are surprisingly similar to the 2 percent oxygen depletion trend we're seeing induced by human-related activity over the last 50 years."

He added, "We don’t know if the ocean is headed toward another global anoxic event, but the trend is, of course, worrying."

Ostrander said, "At this point, we are only just beginning to understand how oxygen levels in the ocean have changed in the past. But with our new tool, we’ve already learned that one of the most extreme climate events in the sedimentary record provides an uncomfortably reasonable analog for possible future ocean oxygen loss and subsequent ecological shifts."

He added, "We hope to use this information to gain a better look into the short-, medium- and long-term future for oxygen content in today's oceans."