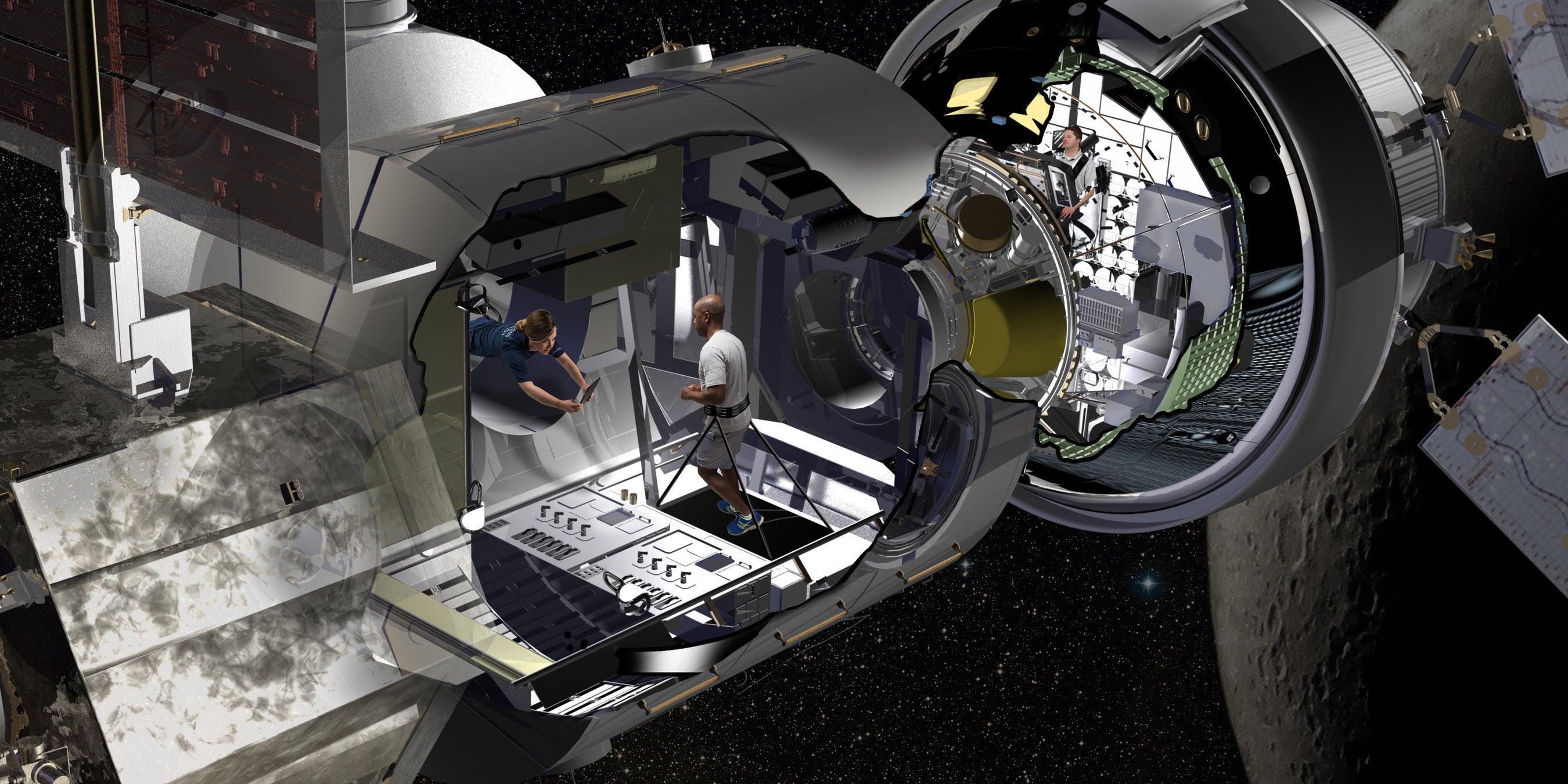 One of the billions of small steps man needs to take to reach Mars was taken last week.

Aerospace giant Lockheed Martin announced it is building a prototype of a robotic deep-space outpost for NASA.

The company is transforming a 15-year-old shuttle-era container used to haul cargo to the International Space Station into a prototype of a habitat where astronauts would live during long missions.

It’s a step toward what NASA calls the Deep Space Gateway, an outpost orbiting the moon. NASA wants to have it up and running by the mid-2020s. The goal is to provide a stepping-stone for a push into the solar system and, eventually, Mars.

The Deep Space Gateway will be uninhabited for months at a time, so it will have to have robotic capabilities to operate autonomously.

The interior of the massive aluminum cylinder will be turned into living quarters with work stations, exercise and storage spaces for food, water, and supplies — “all the things you need to live and be happy in space,” Lockheed Martin program manager Bill Pratt said in a press release.

“It is easy to take things for granted when you are living at home,” Pratt said. “Something as simple as calling your family is completely different when you are outside of low Earth orbit. While building this habitat, we have to operate in a different mind-set that’s more akin to long trips to Mars to ensure we keep them safe, healthy and productive.”

We talked to Jim Bell, an astronomer, planetary scientist, professor in the School of Earth and Space Exploration at Arizona State University, and veteran of nine NASA missions, about some of the problems that have to be cracked before humans live in deep space.

Bell cautioned that the space agency is blue-skying the concept.

“It’s an idea being pitched by NASA,” Bell said. “We don’t know if it’s really going to happen or not.”

He pointed out it’s an extension of the space station.

“The space station is an outpost in low Earth orbit where we do some research,” Bell said. “The next step — an outpost at the moon — is not a crazy idea. It’s a stepping-stone. If the ultimate goal is to get to Mars, we have to learn how to work in deep space again. We haven’t done it in 40 years.”

Question: Artificial gravity is a problem that has to be cracked. What are some of the other obstacles in living in deep space?

Answer: “Radio waves travel at the speed of light. People on Mars are at least around four minutes away by the speed of light when Mars is closest to Earth, and as long as around 20 minutes when it’s farthest from Earth.”

Take a phone call, for example. You say “Hello,” then it takes twice that delay, anywhere from about eight to 40 minutes later to hear “Hello” back. That gap is called latency. Latency applies to voice calls, email, any kind of communication that travels at the speed of light.

“It’s because of this huge distance involved,” Bell said. “You can’t have real-time communications. There’s always that gap. At the moon, it’s around three seconds delay for round-trip communications. ... It’s impossible to have a real-time conversation like we’re having. Going to the moon will be practice in some way for that long latency gap.”

Q: What are other obstacles in living in deep space?

A: “Exposure to radiation is different at the moon than it is in low Earth orbit. You have to deal with that radiation, so shielding is needed.”

In low Earth orbit, where the International Space Station resides, it’s protected from the worst radiation by the Earth’s magnetic field. The station’s hull blocks most of the radiation impinging on it.

Obviously supplies will be an issue.

“Especially for long trips, how many supplies do you bring from Earth? How much do you need to live off the land? Do you get your water from ice on the moon?”

LunaH-Map, ASU’s first exclusive NASA deep-space mission, will investigate precisely that. When it launches in 2019, the tiny spacecraft will fly to the moon and hunt for ice. Bell is mission deputy principal investigator.

Bell pointed out that people have to reinvent how to go to deep space. It has been 40 years since the Apollo missions. If the Earth was a basketball and you laid a dime on top of it, that dime is as far into space as we go right now.

“Everything we’ve done in human space exploration since Apollo has been only at the distance of that dime,” Bell said. “People haven’t been beyond the dime since Apollo. Many of the people who knew how to do that are retired or gone. It has to be reinvented. NASA’s big new SLS rocket that LunaH-map is going to launch on in 2019 is part of that.”

Top image: Lockheed Martin artist rendering of the NextSTEP habitat docked with Orion in cislunar orbit as part of a concept for the Deep Space Gateway.