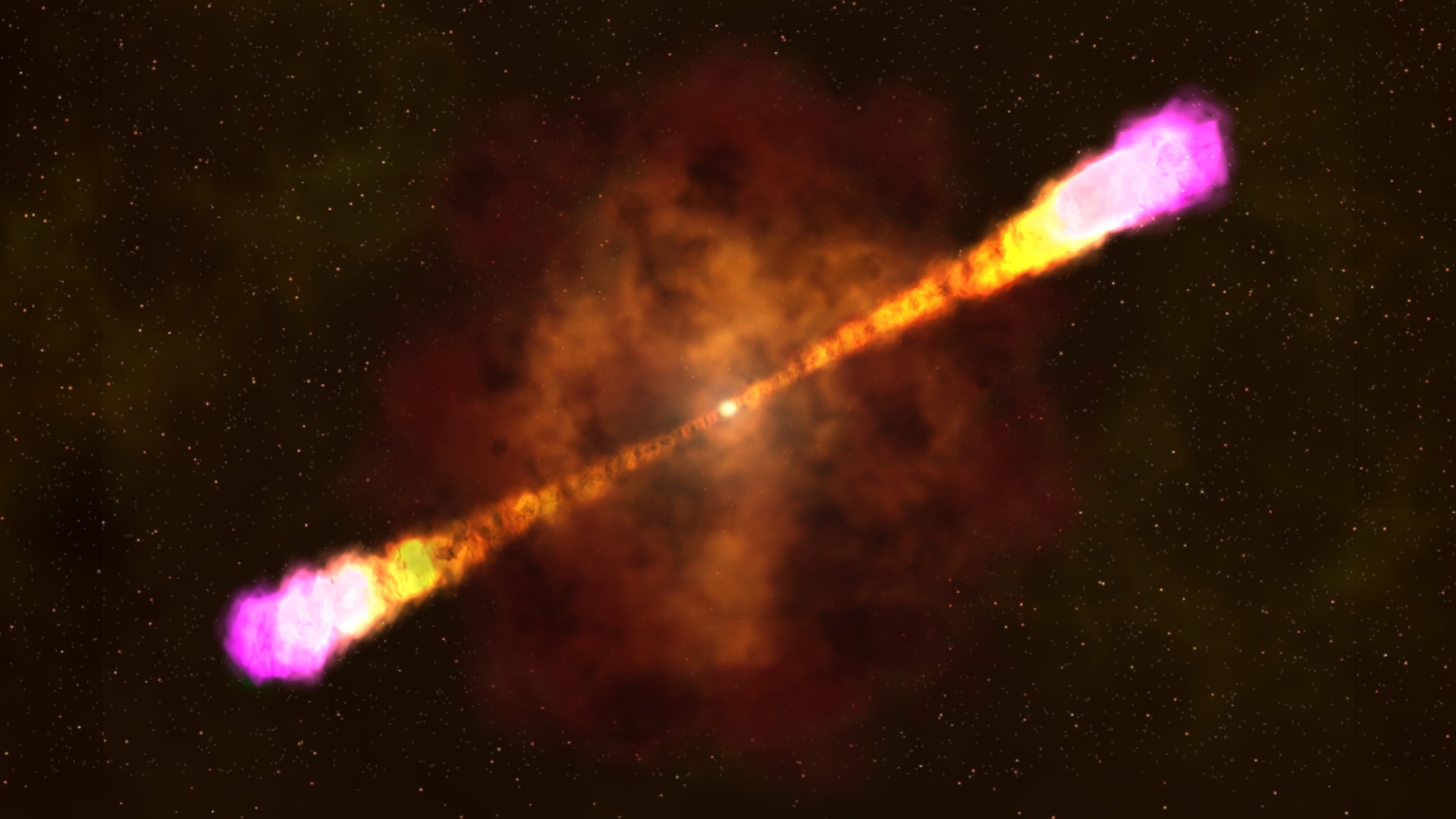 In June 2016, an international team of 31 astronomers, led by the University of Maryland's Eleanora Troja and including Arizona State University's Nathaniel Butler, caught a massive star as it died in a titanic explosion deep in space.

The blast of the dying star released in about 40 seconds as much energy as the sun releases over its entire lifetime, all focused into a tight beam of gamma rays aimed by chance toward Earth.

The team's findings, reported in the scientific journal Nature, provide strong evidence for one of two competing models for how gamma-ray bursters (GRBs) produce their energy.

"These are the brightest explosions in the universe," said Butler, an associate professor in ASU's School of Earth and Space Exploration. "And we were able to measure this one's development and decay almost from the initial blast."

The gamma-ray blast on June 25, 2016, was detected by two NASA satellites that monitor the sky for such events, the Fermi Gamma-ray Space Telescope and the Swift Gamma-Ray Burst Mission.

The satellite observatories detected the burst of gamma rays, identified where in the sky it came from, and sent its celestial position within seconds to automated telescopes on the ground.

The MASTER-IRC telescope at the Teide Observatory in the Canary Islands observed it first, within a minute of the satellite notification. The telescope is part of Russia's MASTER network of robotic telescopes at the Teide Observatory. It made optical light observations while the initial phase was still active, gathering data on the amount of polarized optical light relative to the total light produced.

After the sun set over this facility eight and a half hours later, the RATIR camera in which ASU is involved began observing. RATIR stands for Reionization And Transients InfraRed camera; it is mounted on a 1.5-meter (60-inch) robotically controlled telescope located on San Pedro Mártir Peak, at Mexico's National Astronomical Observatory in Baja California. Butler is the principal investigator for the fully automated camera. The RATIR camera, directed from ASU, is mounted on on an automatically controlled telescope at Mexico's National Astronomical Observatory. RATIR allows astronomers to follow up (within a minute or two) on rapidly changing celestial events, such as gamma-ray bursters. Photo by Nathaniel Butler/ASU

"At best, it takes a minute or two for our telescope to slew to the burst's position," Butler said. "In this case, we had to wait for it to rise over the horizon. This means the gamma-ray burst itself had ended, and we were observing what's called the afterglow. This is the fading explosion as the radiation shocks up the interstellar medium around the star that exploded.

"The RATIR camera lets us take simultaneous images in six colors, two optical and four near-infrared. Over the past five years, RATIR has imaged 155 gamma-ray bursts."

While gamma-ray bursters have been known for about 50 years, astronomers are still mostly in the dark about how they erupt.

Gamma-ray bursts are detected approximately once per day and are brief, but intense, flashes of gamma radiation. They come from all different directions in the sky, and they last from tens of milliseconds to about a minute, making it hard to observe them in detail.

Astronomers believe most of these explosions are associated with supernovas. These occur when a massive star reaches the end of its normal existence and blows up in a colossal explosion. A supernova throws off some of the star's outer layers, while its core and remaining layers collapse in a few seconds into a neutron star or, in the case of highly massive stars, a black hole.

Above: The RATIR camera captured the fading afterglow (arrow) of the June 2016 gamma-ray burster in this sequence running from June 26 through Aug. 20, 2016. Images by Nathaniel Butler/ASU

Continued RATIR observations over weeks following the June 2016 outburst showed that the gamma rays were shot out in a beam about two degrees wide, or roughly four times the apparent size of the moon. It was sheer chance that Earth happened to lie within the beam.

Beaming effects, Butler said, may result from the spin of the black hole produced after the supernova explosion, as it releases material along its poles.

"We think the gamma-ray emission is due to highly energetic electrons, propelled outward like a fireball,” Butler said. Magnetic fields must also be present, he added, and theories differ as to how the fields are produced and to what extent the flow of magnetic energy outward is important.

A key diagnostic is measuring the radiation's polarization, he explained. This, astronomers think, is largely controlled by the strength of the magnetic fields that focus the radiation.

"Measuring the strength of magnetic fields by their polarization effects can tell us about the mechanisms that accelerate particles such as electrons up to very high energies and cause them to radiate at gamma-ray energies," Butler said.

In the case of the June 2016 blast, the scientists were able to measure polarization using MASTER within minutes, an unprecedented early discovery. The large amount of polarization the team observed indicates that powerful magnetic fields were confining and directing it. This lends support for the magnetic origin model for gamma-ray bursters.

Although gamma-ray bursters have many more mysteries to be unfolded, Butler said, "this is the first strong evidence that the early shocks generated by these bursts are magnetically driven." The RATIR camera, seen here mounted on the back end of the telescope, is stabilized with struts to assure correct alignment with the telescope when the whole assembly rapidly slews to lock onto a new target. Pictured is Alex Farah, mechanical engineer at the observatory. Photo by Alan Watson/UNAM

Top photo: This image shows the most common type of gamma-ray burst, thought to occur when a massive star collapses, forms a black hole and blasts particle jets outward at nearly the speed of light. Image by NASA Goddard Space Flight Center