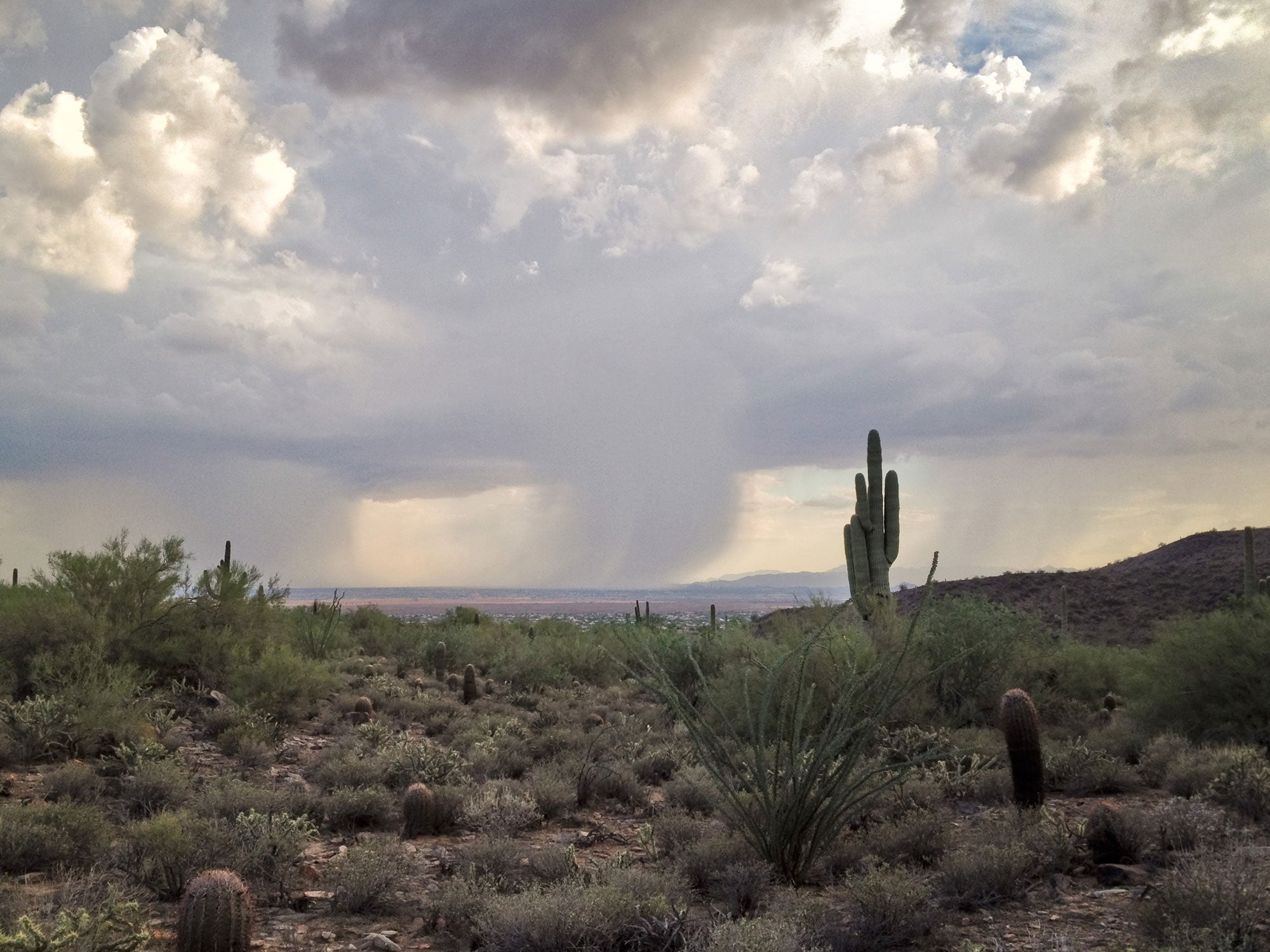 Gully washers and boulder rollers: How monsoons shape the desert

Editor's note: This is the first in our weeklong monsoon series. To read the second story, about social media's influence on storm coverage, click here. For the final story, looking at monsoons from a Native American cultural viewpoint, click here.

Fly above the desert and the paradox is obvious: It’s a place with almost no water, but it’s entirely shaped by water. Washes that flow maybe every 20 or 30 years are etched into hardpan far from mountains.

Monsoons define the desert by driving physical change. Summer storms sculpt the land. Sediment is deposited. An old channel becomes silted up. A new channel is carved in another place. Like the creative process, some of it is a mystery.

Arizona State University geomorphologist Kelin Whipple studies how the Earth is shaped by climate, tectonics and surface processes. One time he was examining an enormous boulder at a ranch near Bagdad, Arizona. The rancher called the storm that moved it a “boulder roller.”

A storm that tosses around boulders the size of minivans doesn’t come around often. People who live close to the land sit up and pay attention to events like that. “They know they’re quite rare,” said Whipple, a professor in the School of Earth and Space Exploration.

Those rare floods chisel the land more dramatically, but it’s the gully washers, not the boulder rollers, that do more work year in and year out.

“A day of high flow is still just one day out of 365,” Whipple said. “A flood that occurs on an annual basis is just not a big flood. Floods that really do the work of deepening canyons and transporting sediments, those are floods that occur at a minimum once every two years. ... It’s the smaller ones that add up. We don’t know really in a quantitative way where is the range of floods that do the most work, either in a mountain environment or a desert environment — we don’t know that very well.”

In the 1950s geologists began to learn that the floods that do the most work over time are the smaller biannual floods.

Annual monsoon flooding doesn’t do much at all. It takes critical velocity plus depth to move large material, like gravel. (In geology, gravel is anything larger than sand: granules, pebbles, cobbles and boulders.) Certain thresholds of shearing stress, force that causes layers or parts to slide upon each other in opposite directions, need to be topped before anything happens.

“You need a certain amount of shear stress before you’re going to get gravels actually moving,” Whipple said. “Usually a two-year (flood) will get gravels moving so you get some change. If you’ve got a system that’s armored with a bunch of big boulders, or if you’re asking what floods can actually rip in and deepen the canyon, erode deeper over time, it’s got to work its way into rock and might have higher shear stresses and pull out big blocks, then you’re talking about a five- or 10-year flood to even exceed the shear stress and get anything to happen.”

There are two big rain events in Southwestern deserts: the monsoons and occasional hurricanes wafting up from the Gulf of California. Geologists have a limited amount of data to work with. It only goes back 20 or 30 years, or at most 100. Existing data hints at a tapering-off of flood size. Scientists know how big floods get, but not how often they happen. Floods that would wipe Phoenix or Tucson off the map don’t happen at all.

“They just don’t get much bigger than X,” Whipple said. “It never happens. There’s no such thing as a 5,000-year flood.”