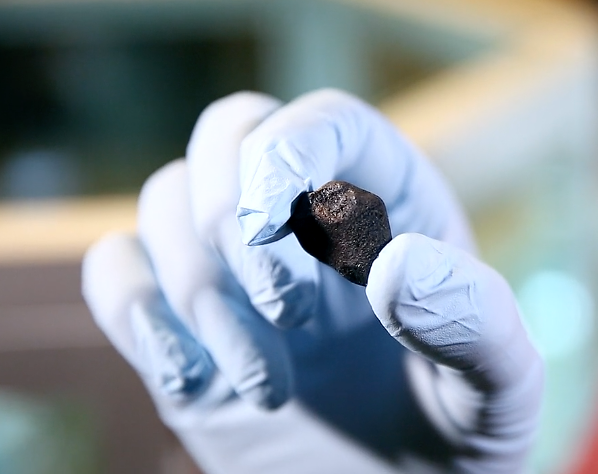 The Arizona fireball has a name: English version is Cibecue Star Rock

Far out in the asteroid belt, more than 200 million miles from Earth, an asteroid the size of a Volkswagen Beetle lazily orbited the sun. Then something — we’ll never know what — disturbed it.

It was knocked out of its orbit into an elliptical orbit. It swung closer and closer to the sun. Then, last summer on June 2, it roared into Earth’s atmosphere at 40,000 miles per hour.

This random chain of cosmic events landed it on the homeland of the White Mountain Apache Tribe in eastern Arizona.

Now it has a name. The tribe has named their meteorite Dishchii’bikoh Ts’iłsǫǫsé Tsee. In English, it is Cibecue Star Rock. It was officially confirmed Monday.

Recovered by an Arizona State University team during a three-day expedition, it is a meteorite like no other ever studied.

“It does contain things we have not seen before,” said Laurence Garvie, research professor and curator of the Center for Meteorite Studies in the School of Earth and Space Exploration.

It is an ordinary chondrite — the most common type of meteor. However, when Garvie examined it in detail, he found some unusual features.

“Ooo, we’ve never seen anything like this before,” he said. “We just finished the initial scientific analysis of Dishchii’bikoh. It turned out to be really interesting. In one respect it’s an ordinary chondrite, but when we looked at the structure there’s aspects we’ve never seen before. This is where the future scientific analysis will take place.”

It has been classified as an LL7 meteorite. Only 50 of that type have been found over the world. This is the first in North America.

“Look at the structure inside,” Garvie said. “These stones are really, really fragile. It’s like someone crushed this rock with a mortar and pestle and then squeezed it back together very gently. How did that structure form? That’s something we still need to work at.”

The name and classification were approved by the Committee for Meteorite Nomenclature, a 12-member international committee that classifies all new meteorites found around the world. The committee is part of the Meteoritical Society. They mull such questions as, is the name appropriate? How do you justify it being a certain type of meteorite? Is the science there? It’s a difficult and time-consuming process.

“It’s something the public knows almost nothing about,” Garvie said. “It’s a lot of work. It’s not just me eyeballing it saying, ‘It’s a whatever.’ It’s hours of work here and hours of work on microscopes and hours of work looking through boring Excel spreadsheets. Then you have to write a report and then you have to submit it to the nomenclature committee and then, assuming everything is OK, you have to publish your findings. So it’s a long, long process.”

“We wanted something that reflected the local environment and what’s special about it,” Garvie said.

Jacob Moore, assistant vice president of tribal relations at Arizona State University, and tribal chairman Ronnie Lupe were key to securing permission from the tribe to search on their land.

“This would not have happened without a lot of people,” Garvie said. “It’s just been a really, really fun story.”