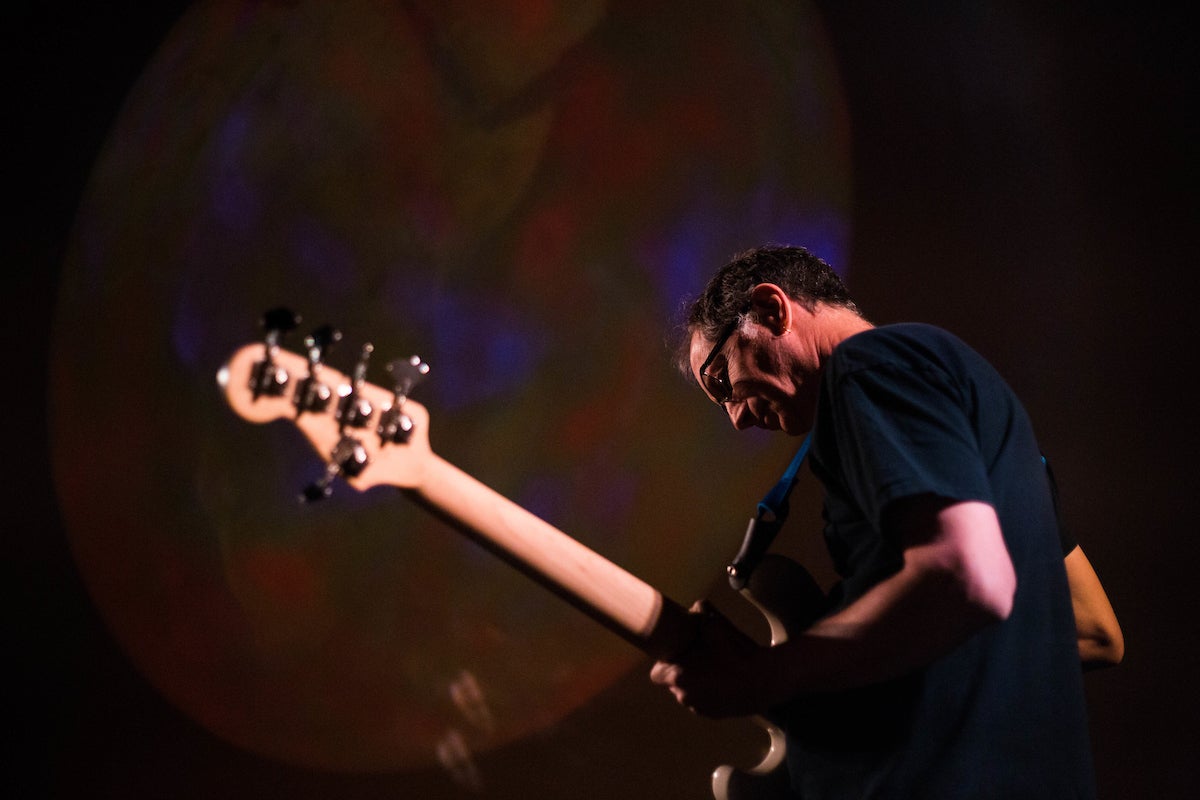 Let’s say you have a complex, scientific story to tell, like you want to point out the irony that while researchers have determined the weight of the moon, the composition of stars and even a theory of what the center of our galaxy smells like, they know very little about what lies just a few dozen miles beneath your feet.

You could write a few long, complicated sentences. Or you could turn to a ballet-dancing geologist, a bass-playing geophysicist and a belly-dancing theoretical astrophysicist.

“When you learn a scientist is also a belly dancer,” said Lance Gharavi, a professor in ASU's School of Film, Dance and Theatre, “when the universe hands you a gift like that, you say, ‘thank you’ and leverage that.”

Gharavi’s new play, “Beneath: A Journey Within,” is billed as a 3-D, multimedia experience that fuses cutting-edge scientific research and performance art, using scientists as performers, to “peer into the mysteries of what lies deep below the Earth’s surface.”

The collaboration between the ASU School of Film, Dance and Theatre and the School of Earth and Space Exploration (SESE), is an attempt to make science both compelling and approachable, and it provides a model for transdisciplinary collaboration and public outreach.

“Scientists and artists are great storytellers, but sometimes we use different language to tell the story,” Gharavi said.

The project showcases an approach that ASU has become known for, combining disparate disciplines to foster new understanding. Gharavi said it’s the second such effort involving the Herberger Institute and SESE. In 2013, the schools got together to produce a version of Stephen Hawking’s “A Brief History of Time.”

The show also gives a chance for researchers to strut their stuff while getting their geek on.

It started with Ed Garnero, a science professor in SESE, who wanted to try a different approach to reach his Geology 101 class. He wanted something that “combined the narrative of a TED Talk and the light, sound and movement of a Cirque du Soleil.”

He turned to Gharavi, an actor, director, performance artist and writer who links interdisciplinary teams to explore difficult subjects through multimedia performances.

Over a three-year span, they developed their story, co-teaching a class called “Devising: Imaging the Earth’s Body,” to see how the combination went over with students.

Over time, Gharavi started to see Garnero’s fun and creative side. When the artist discovered the geophysicist played bass, a narrative began taking shape.

Gharavi also learned of other scientists with hidden talents, like Patrick Young, a theoretical astrophysicist and better than novice belly dancer and Christy Till, a former professional ballet dancer turned geologist.

“Going back and getting in touch with my former dancer self and repurposing it as a scientist has been fun,” said Till, a professor in SESE, who will plan her movements according to planetary cycles in the show.

Even though Till hasn’t performed since 2001, it didn’t take long for the blisters to develop on both of her toes. She used duct tape to cover them up. “Old theater trick,” she quipped.

Aside from watching performances, audiences will also virtually visit the lab of a mineral physicist who uses diamonds in startling experiments and talk with the first woman to lead a NASA mission beyond the Earth’s orbit.

The one-hour show also has a few tricks to make current scientific research artful, accessible, and consumable to the public; to create new visualization tools that aid scientists in research, communication and education; and to engage and explore new models of collaboration between artists and scientists.

To that end, director Erika Hughes said “Beneath” succeeds.

“One of the things we’re working on is pushing against this divide between science and the arts,” Hughes said. “We can use performance to unlock understanding.”

Top photo: Lead scientist Ed Garnero plays his guitar, which lights up certain spots of a virtual Earth during the rehearsal of "Beneath: A Journey Within" at the Marston Exploration Theater on Thursday  in Tempe. Photo by Deanna Dent/ASUNow