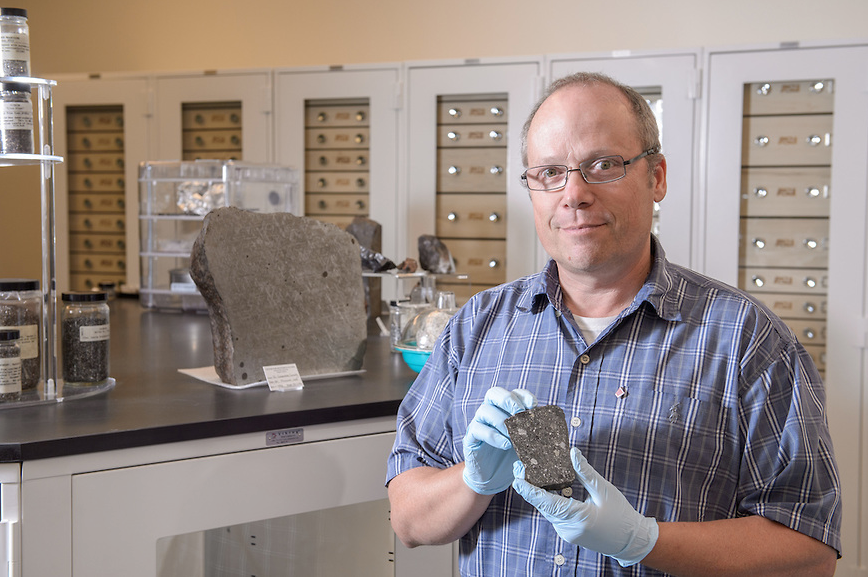 Arizona State University’s Center for Meteorite Studies looks for clues about the formation of the solar system by studying the characteristics of meteorites.

The center is home to the largest meteorite collection housed in a university. There are a few government and private collections that are larger, such as the Smithsonian’s collection, for example, but none that are operated by a university.

Laurence Garvie is the curator of the collection and a research professor in the School of Earth and Space Exploration. Professor Garvie studies meteorite minerology, but he devotes a considerable amount of time to curating the collection as well.

“What we have here at ASU is probably one of the best nongovernment, I’d have to say, curation facilities,” Garvie said. “[It’s] really first-class. It’s a growing collection.”

Garvie said there is an enormous public interest in meteorites, which is critical to the center’s public outreach. It’s not difficult to get people out to events. Furthermore, he said the press is always at his door whenever a big meteorite fall happens in Arizona.

However, the meteorites serve a greater purpose than looking cool. Garvie is part of a research group that studies the different characteristics of meteorites in order to figure out how the solar system formed.

They look at differences in meteorite samples ranging from simple characteristics like size and shape to more subtle ones like mineral content and crystal structure. All of this is used to figure out how the meteorite formed and thus point to the conditions of the solar system up to billions of years ago

“In the beginning of the solar system, it was gas and dust [and] high temperatures,” said Devin Schrader, an assistant research professor in the Center for Meteorite Studies and the School of Earth and Space Exploration. “There were objects that condensed directly from the gas and dust called calcium-aluminum-rich inclusions. By studying those, we can learn about the age of the solar system.”

Professor Schrader’s research focuses on meteorites that have not undergone huge changes to composition. Many meteorites that have gone largely unchanged since the beginning of the solar system still have condensed inclusions, called chondrules, which look like small white dots inside the meteorite. These little bubbles serve as a looking glass back to billions of years ago when the solar system was still forming, and work at ASU tries to determine just how long ago that was and how it happened.

“I study chondrules to try to – well two things: to learn about how the solar system formed and the gas composition and processes that were ongoing at the time and then to provide constraints for modelers and to try to determine what that chondrule-formation process was,” he said.

According to Schrader, the chondrule-formation process has been uncertain for about the past hundred years that scientists have been studying it. However, researchers like Schrader have gotten much closer to unlocking the mystery of the process, which could provide much insight into the conditions of the early solar system.

Schrader is also doing research funded by NASA’s Laboratory Analysis of Returned Samples Program, which collects data on asteroids and meteorites with which to compare new returned samples in order to learn as much as possible from them.

“Right now, we have a lot of missions to small bodies,” he said. “I’ve heard a lot of people say it’s the golden age of exploration to small bodies in our solar system … So, the amount of science that will be coming out in the early 2020s is incredibly exciting.”

ASU has also been selected to lead NASA’s upcoming Psyche mission. Psyche is both the name of the mission and the asteroid a NASA- and ASU-designed spacecraft will be visiting. The principal investigator of the Psyche mission science team is Lindy Elkins-Tanton, director of ASU’s School of Earth and Space Exploration.

Of the upcoming missions Schrader said, “I think it’s going to be huge for how our solar system formed, how it’s evolved and then the comparisons of these objects … and hopefully to learn that there are things we don’t have samples from. I think that would be even more exciting.”

“And then we’ll need to go get them.”

To learn more about the Center for Meteorite Studies, visit their website.