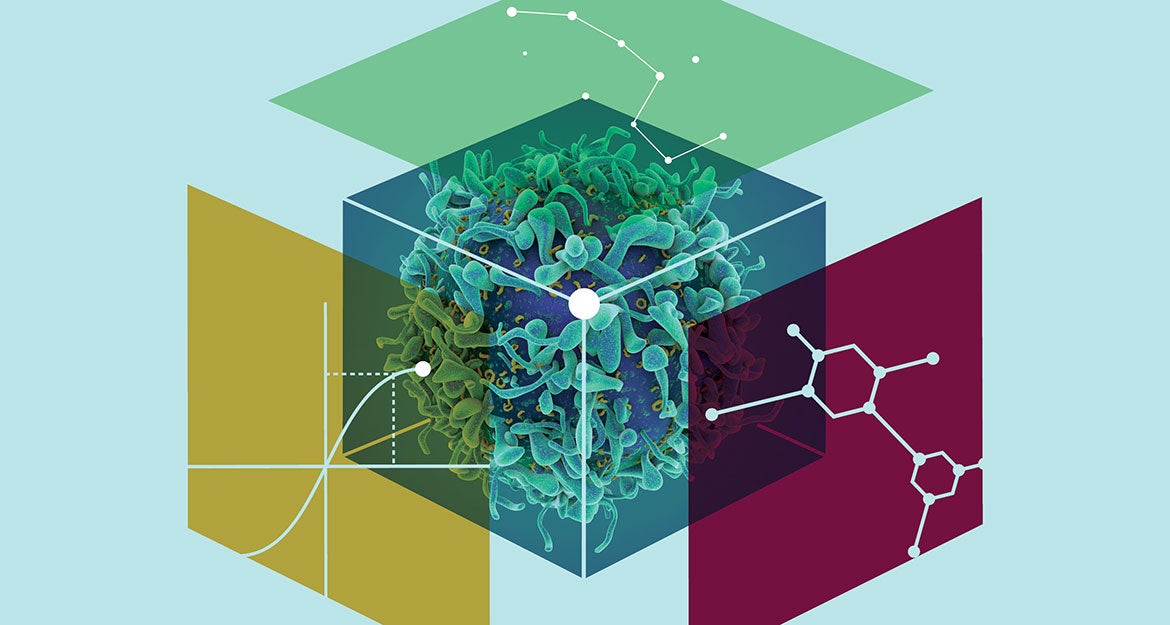 If you want to eradicate a deadly disease like cancer, you’ll certainly want to call on doctors, biologists and other health professionals. But despite our best efforts, cancer still eludes our control. Now, researchers from outside of traditional health disciplines are bringing fresh perspectives to this old — even ancient — disease.

“Break down silos and bring all the cancer fighters together —  to work together, share information, and end cancer as we know it,” said former Vice President Joe Biden, chairman of the Cancer Moonshot, a $1 billion initiative to accelerate development of new cancer detection and treatment options. The initiative, which aims to bring about a decade’s worth of advances in just five years, emphasizes the need to work outside the traditional medical-research model and bring a variety of diverse disciplines into the fight.

Researchers at Arizona State University are pioneers in crossing disciplinary boundaries to solve complex problems. In fact, faculty members in fields as diverse as physics, astronomy and engineering have been conducting research that can help detect, understand and manage cancer. By integrating data, methods and concepts from seemingly disparate fields of knowledge, researchers can “think outside the box” to ask questions that have never been asked before and develop innovative solutions to persistent problems.

Software for stars and cells

As a Regents’ Professor of astronomy in ASU’s School of Earth and Space Exploration, Rogier Windhorst spends most of his time studying the cosmos. Recently, however, he turned his efforts inward to develop software that makes evaluating cancer biopsies quicker and more accurate. The software was originally developed for the Hubble Space Telescope to dissipate and de-blend objects that muddle or block a researchers’ view of distant objects. Windhorst’s new application takes the “noise” out of images at a cellular level.

“These images are so crowded with neighbors and objects in the foreground or in the background, or even objects at the same distance, that finding anything reliably is not an easy task,” said Windhorst, pointing to a photograph taken by the Hubble Telescope. “It’s as if you were driving your car through intergalactic space and there are all these raindrops on your windshield. Our software allows us to reduce the ‘noise’ in the image and isolates the data that is important.”

Windhorst initially got the idea to apply the Hubble software to cancer biopsies when he was attending a conference for researchers at ASU in the early 2000s. There, he met two doctors who were thinking about ways to make the manual process of evaluating biopsies less time-consuming, and he immediately thought about the Hubble images.

“The step toward applying it to medicine was a small one. Really, it’s essentially the same software for a slightly different problem. The objects we look at on the Hubble are the brightness level of a firefly on the moon, so they are very faint, but we can find them and classify them with high reliability. So it seems so obvious to me that this is something that would work well. We already have the software to do that.”

In the same way that images from space can be cluttered, images used to diagnose and evaluate a patient’s cancer biopsy can be spattered with flecks that make it difficult for a doctor or technician to make an accurate evaluation.

“We impose a sensor and a series of concentric ellipses, then we try to find all the outliers, some of which are background objects, some are noise and some of which are real. Basically, it shows the number of cells in proximity. If the cell density is high, there is a higher chance that the something will have spread off the main blob and has started to metastasize,” Windhorst said.

With a minimum number of modifications, a graduate student with a laptop was able to alter the code of the Hubble software and re-purpose it into the what they named Source Extractor. A pre-pilot study found the software to be effective and accurate. And because the technician no longer needs to count cells manually, the results of the test can be determined in hours rather than days.

“Our main conclusion was that you can reliably find faint features in minute, nonuniform noisy backgrounds. And we can reliably process a large number images at once,” he said.

Windhorst notes that the initial study was a pre-pilot project. He hopes to advance the research further with a goal of eventually producing a marketable product.

“With additional study, it could be developed into an industry, not just for a profit, but in a way that is helping them, rather than giving them another piece of software to worry about,” he said. “That is what the doctors want.”

Engineering the rats out of research

When envisioning cancer research in action, a laboratory full of rats and mice often comes to mind. But animal research may soon be less common due to advances in 3-D bio-mimetic modeling, which makes it quicker and easier to test new drugs and treatments. Mehdi Nikkhah, assistant professor in ASU’s School of Biological and Health Systems Engineering, is at the forefront of this research. He has developed a series of 3-D tumor models that replicate the way cancer behaves in the human body.

Traditional in-vivo modeling — research done on animals — requires the researcher to form tumors in the animals’ bodies and study how the tumors grow, migrate and interact with healthy cells. However, it is difficult to control the micro-environment because there are so many confounding factors in living organisms the researcher cannot isolate single variables. And because of the physiological differences between human and animal bodies, research results are not always transferable to humans. To add to the difficulties, research using animal models is slow and expensive.

These factors have prompted ASU engineers to find new ways to develop tumor models in the lab and study cancer in a well-controlled experimental setting.

Conducting research with 3-D models is highly efficient because scientists can selectively isolate and control the variables of their experiments. Because the models are bio-engineered, these experiments also produce consistent results that are highly replicable. This means the results have greater reliability and are far more readily transferable from the lab to real-world applications.

“We can replicate these devices, so we can keep repeating the same experiment over and over in identical conditions. This means we can reproduce the results consistently,” Nikkhah said.

3-D modeling also helps researchers better understand how cells and tissues form and function, as parts of whole living organs that are highly dynamic and variable in terms of their structure, mechanical properties and biochemical microenvironment.

“Now we can play around or change any factor we want. For example, we can change matrix stiffness, or we can incorporate just stromal cells such as fibroblasts along with cancer cells in our models, or fibroblasts plus cancer and immune cells,” Nikkhah said. “And we can perform studies in a well-controlled experimental setting. We try to mimic what actually happens inside the human body.”

While most cancer research is focused on new drugs and treatments, Paul Davies, a Regents’ Professor of physics and director of ASU’s Beyond Center, is looking back — way back — into the primordial origins of life on Earth to explore the of causes of cancer in contemporary humans.

Finding a cure for cancer has remained a medical mystery in part because cancer is not a single disease, but actually a set of more than 100 distinct maladies. The problem is compounded because cancer responds to treatment differently in every patient.

To answer these questions, Davies takes a more foundational approach to discover the origins of the disease and how it develops in complex organisms such as modern human beings.

"I see cancer as a systematic response to a damaging environment and not an accidental product of the damage."

— Paul Davies, Regents’ Professor of physics and director of ASU’s Beyond Center

“We tend to think of cancer as a human disease to be eliminated. But with one or two possible exceptions, every species of multi-cellular organism gets cancer. The list includes such improbable suspects as corals, and even hydra, which has only two cell types. They are very primitive organisms, yet they get cancer. The list includes virtually all mammals, birds, fish, reptiles, plants, even fungi,” Davies said. “So when you look at the great tree of life with all these branches and you trace back to their common origin, you’re going back over a billion years. And the cancer genes, or the propensity for cancer to occur, clearly has very deep evolutionary roots dating back to the dawn of multicellularity.”

The transition from single-celled to multi-celled organisms occurred between 1.5 billion and 1 billion years ago. By 500 million years ago the complex body plans of modern organisms had evolved. But with the emergence of multicellularity came the problem of cancer, which represents a default to a more primitive “selfish cell” phenotype.

“How can we test this theory? If cancer is a very ancient phenomenon, it should be controlled by very ancient genes. We need to look at the ages of the genes that are active in cancer as a clue to what’s going on. We can trace cancer back to around the time of that transition from single cell to primitive multicelled organisms because cancer is a bit like a speciation event. It’s like a new species popping up in your body. It’s a body gone wrong,” Davies said.

Bacteria possess an ancient and deeply rooted stress response. They are able to elevate their rates of mutation in a bid to evolve out of trouble. Multi-celled organisms inherited this ancient ability, but in healthy organisms it is kept in check. Cancer cells, however, switch it back on; prolific mutations are a well-known hallmark of cancer. Cancer is thus a reversion to an ancestral form.

Revolutionary to this theory is the idea that cancer is not the creation of genetic damage by carcinogens such as cigarette smoke or radiation. Rather, it is a cell’s response to such stressors. Essentially, environmental toxins aggravate healthy cells, triggering the launch of primordial genetic programs.

“I see cancer as a systematic response to a damaging environment and not an accidental product of the damage,” Davies said. “I use the analogy of a computer program: The cell says ‘I have a deeply embedded cancer program. I’m going to switch it on now and hit the run command because I don’t like this environment. I’m in danger, but I have this ancient set of genes that I’ve used before in the past billion years and I’m going to revert to that.’”

Beyond the cure – new directions in the treatment of cancer

Ultimately, an interdisciplinary approach to research may lead to entirely new goals for cancer management. Rather than trying to cure cancer entirely, cutting-edge researchers have begun to redirect their efforts into transforming cancer from a fatal disease into a chronic one — like HIV or diabetes — that is treatable for most patients.

“Our job as theoretical scientists is to take the facts we already know and connect the dots in a different way. So what we’re trying to do is to re-invent the cancer narrative with a different slant,” Davies said. “A lot of scientists are coming to the same conclusion: We’re not going to find the miracle cure that will make it all go away. But we don’t need to. We can manage this into a chronic disease rather than something that is aggressive and fatal. We don’t have to annihilate every cancer cell in the body, only make it something is manageable and that you can live with.”