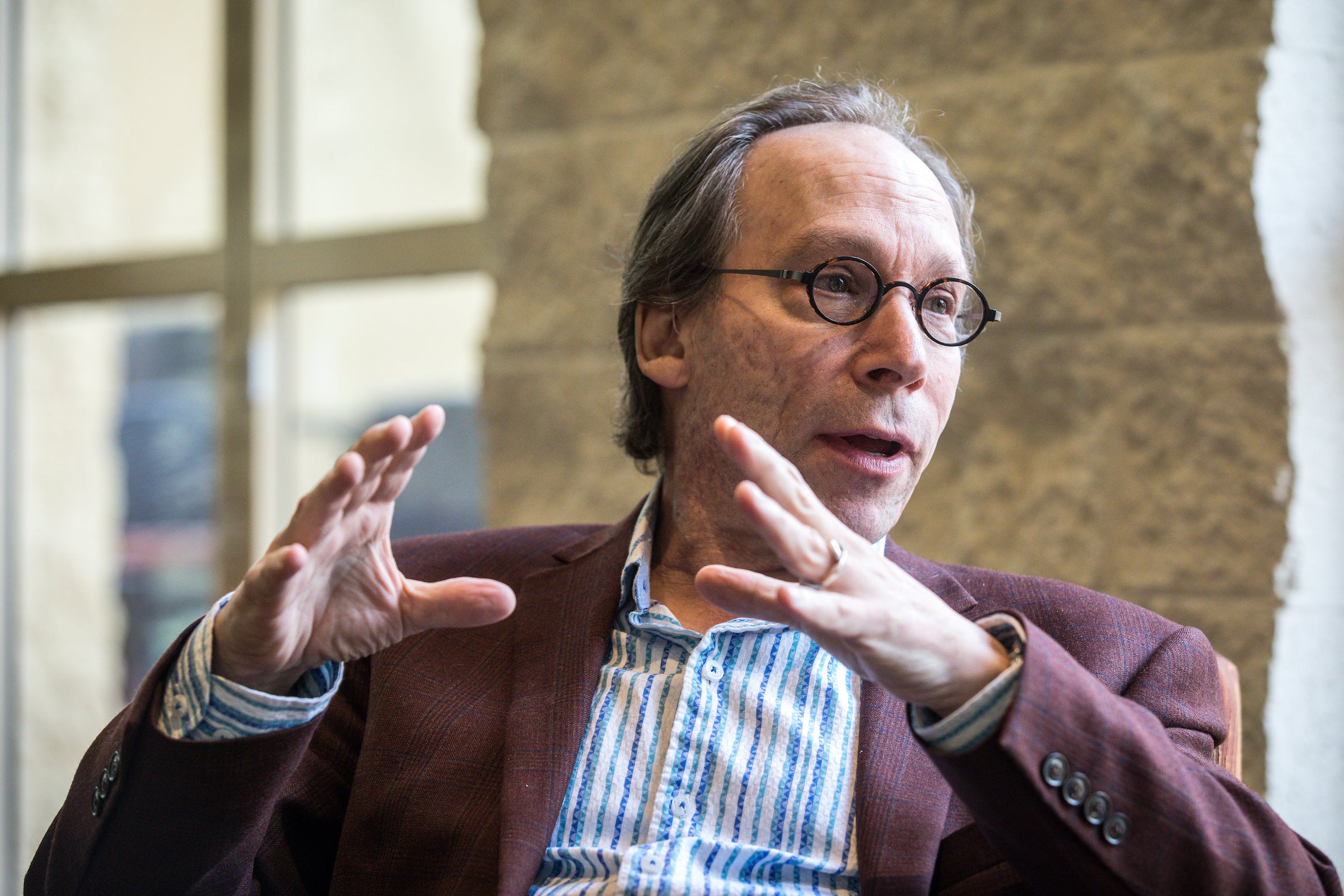 Most of modern physics was created in the past 100 years. It took thousands of people from different countries decades to finish what theoretical physicist Lawrence Krauss calls an “intellectual Gothic cathedral” — the standard model of particle physics.

This is the story Krauss tells in his new book "The Greatest Story Ever Told — So Far."

Like the electromagnetic field, the book has two forces in its tone: the majesty of a master unveiling the secrets of his demesne, but also the gleeful irreverence of a child.

Krauss, Foundation Professor of the School of Earth and Space Exploration at Arizona State University, and director of its Origins Project, pulls out some exotic tools to craft his explanations of how we got to where we are in understanding the building blocks of reality. One memorable illustration of the laws of physics involves his infant daughter vomiting on the back of his head in a moving car.

“The vomit followed a trajectory well described by Newton, with an initial speed of, say, fifteen miles per hour, and a nice parabolic trajectory in the air, ending on the back of my head.”

The book is a journey through the history of physics, hand lightly held by a teacher who is forgiving without diluting his subject. It’s accessible to laymen, but you do need to bring your brain. Listen as he introduces gauge symmetry:

“Bear with me now, because I am about to introduce a concept that is much more subtle, but much more important. It’s so important that essentially all of modern physical theory is based on it. But it’s so subtle that without using mathematics, it is hard to describe. … So, don’t be surprised if it takes one or two readings to fully get your head around the idea. It has taken physicists much of the past sixty years to get their heads around it.”

“It’s a central feature about how we understand the world and no one knows about it,” he said. “As I think I kind of said somewhere in the book, people think of the 20th century and they think of relativity and quantum mechanics, and 1905 to 1925 are the big two decades. But really 1955 to 1975 were bigger in some sense. We went from understanding one force of nature to understanding three, and understanding the fundamental principle that seems to guide all the forces in nature, and totally revolutionizing our picture of what the universe is really like, that the surface picture is just that — it’s an illusion. That story is really amazing, and that’s why I call it ‘The Greatest Story Ever Told — So Far.’”

Easily as compelling as the hunt for the building blocks of reality are the hunters themselves, physicists ranging from emotional ascetics to Rabelaisian voluptuaries, all fighting like alley cats in heat. Isaac Newton saw further by standing on the shoulders of giants. His modern successors often put spurs on first.

“It is a human activity,” Krauss said. “Scientists are humans, but the science that comes out of it transcends that. Scientists are humans, and they get caught in fads and rivalries and pigheadedness and all the rest, but that shouldn’t detract from the process. ... The fact that people somehow overcome and are ultimately able to change their minds is the greatest part about science. The story changes because people change their minds. They realize they’re wrong and they move in new directions. That’s the difference between that and the other ‘Greatest Story Ever Told’ where you had the answers before you could ask the questions.”

Meet Paul Dirac, of whom Einstein said, “This balancing on the dizzying path between genius and madness is awful.” Sometimes called the second-greatest scientist of the 20th century whom most people have never heard of, Dirac was as famous for his taciturnity as his brilliance. Once asked to explain his discoveries in quantum mechanics, Dirac said they “cannot be explained in words at all.”

When Krauss was an undergrad, he called Dirac to invite him to a meeting for undergraduates. Already terrified, Krauss blurted out a rambling request. There was a long pause before Dirac replied with one sentence. “No, I don’t think I have anything to say to undergraduates.”

Dirac, who shared the 1933 Nobel Prize in Physics with Erwin Schrödinger, was one kind of cat; Schrodinger, who once created an important equation while cavorting on a mountain vacation with a bevy of girlfriends, was another. He was not welcome to teach at Oxford, even as a Nobel laureate, keeping house with both his wife and mistress being frowned upon.

“There are a lot of amazing individuals, and it was fun for me to tell the story, as a story, with the history of the individuals involved, because they’re very diverse,” Krauss said.

Physics is a collaborative discipline, Krauss points out. Cinematic “aha moments” in lonely labs at night are rare.

“Science is a community,” he said. “There are names people remember, but there are a lot of people who are contributing, sometimes wrong-headed ideas, but they drive people the right way. Or sometimes right-headed ideas that are applied incorrectly.”

Krauss said the process of science drags physicists and scientists kicking and screaming to the right answer, even when they have prejudices and wrong ideas, cutting through the surface illusion to the reality beneath. The book is a celebration of what humanity can do, and hopefully humanity can rise above its current issues to move forward, not back.

“It’s an amazing celebration of that incredible intellectual saga, which is unheralded,” Krauss said. “We live in a world right now of alternative facts and nonsense. The process of science, of skeptical enquiry, the basis on empirical evidence, checking sources, all of those things that have led us in science to uncover reality are necessary in society today to help us. Science is taught as a bunch of facts, but it’s not. It’s a process for deriving the facts.”