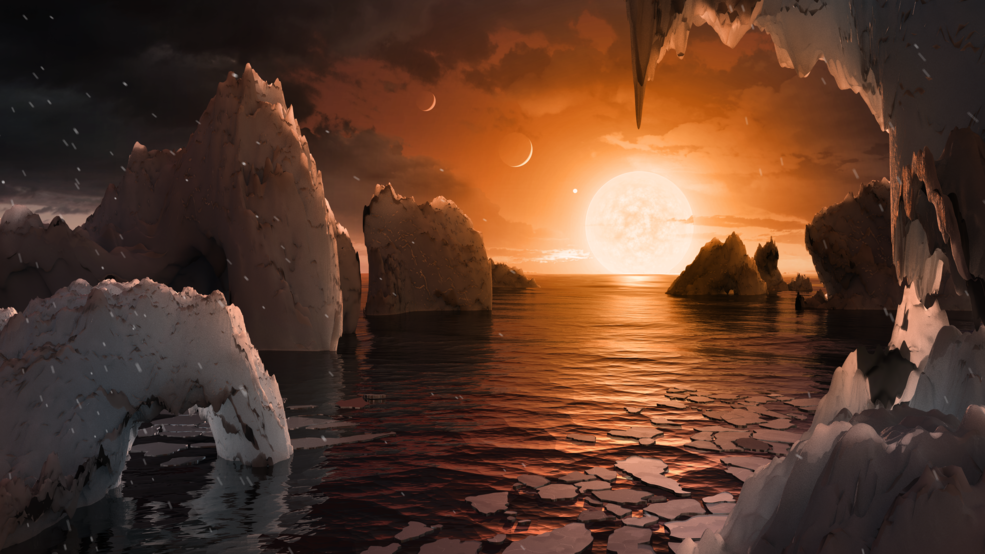 The discovery of seven warm, rocky “Earth-like” planets orbiting a star 39 light-years away has created new opportunities for science, according to the lead researcher of the NASA study published in the journal Nature on Wednesday.

“Before this, if you wanted to study terrestrial planets, we had only four of them and they were all in our solar system,” exoplanetary scientist Michael Gillon told the Washington Post. “Now we have seven Earth-sized planets to expand our understanding. Yes, we have the possibility to find water and life. But even if we don't, whatever we find will be super interesting.”

ASU Now tapped associate professor Jennifer Patience and assistant professor Evgenya Shkolnik of Arizona State University's School of Earth and Space Exploration — experts on exoplanets and habitable zones — to explain what we could find, how we could find it and what it could teach us.

Question: What could we possibly find on these planets? Shkolnik: There are a few things we could find that I’m curious about. One is do they have atmospheres? There’s some potential that their atmospheres might be blown off by the star’s activities. Once that’s determined, I want to know what is in those atmospheres, which involves the detection of biosignatures — indications of life on planets.

But knowing anything about them is valuable, even if they don’t have life. Everyone wants to know how common is life? If we find out that none of these planets have life, which I think is highly unlikely, it tells us something about how unique life is on Earth. The question now is how are we going to detect life on these planets? There are opportunities for false-positive and false-negative detections of life. So how do we say for sure?

Q: So how do we detect life and/or biosignatures on these planets? Patience: The newly discovered planets pass in front of the host star, and with sensitive measurements from telescopes it is possible to study the starlight passing through the atmosphere of the planet to learn about the composition of the atmosphere. Several possibilities include an atmosphere largely made up of hydrogen and helium, or containing molecules such as water and carbon monoxide. The measurements can be made with telescopes in space and on the ground, and the different colors of light are important to investigate different aspects of the atmosphere.

Shkolnik: You can look at different wavelengths of light to get the biosignatures that indicate oxygen and ozone and methane, which are the kind of biosignatures that exist in Earth’s atmosphere. You’d need to use infrared, like the James Webb Space Telescope will do. This solar system will most certainly be observed with JWST. We’ll receive some information about the planets’ atmospheres, assuming they have atmospheres, through that.

At the NASA press conference (Wednesday), one of the researchers involved in the discovery received a question from a reporter about whether or not SETI, which observes radio wavelengths from space, has observed these planets. As far as he knows, SETI has observed the planets but has not observed radio intelligence. So that’s one way of detecting life, but that’s a way to detect intelligent life. The first way to determine if there is life on a planet is to look for biosignatures; there can be biosignatures that indicate life is present but not necessarily intelligent.

Q: What are some of the challenges to finding life on these planets?

Shkolnik: We need to understand what the star is doing because all of the light that we see is the starlight as it passes through the atmosphere of the planet. It’s as if the planet is backlit by the star, so you see the signatures — the fingerprints of these molecules of interest — imposed on the stellar light, which can change how they are interpreted. So one of the issues is we need to understand the star light well.

Another challenge is that it’s possible that stellar photons are producing haze or clouds on planets, making it hard to determine its biosignatures. And, of course, there’s the challenge that life there may be subsurface, so wouldn’t be detectable by observing the surface of the planet.

Q: Do we even know what conditions make for a habitable planet?

Patience: There are a range of factors that are important, including the temperature and radiation environment of the planet. A key requirement is a temperature that would allow liquid water to be present. Water is an important factor for life, so a detection of water would be an important step in the exploration of these planets, though water alone would not determine if there is life present on an exoplanet.

Shkolnik: It’s hard to create a set list because the conditions of Earth are the only ones we know about. It’s the only place we know about with life, at the moment. So we have a very Earth-centric understanding of what it takes for a planet to be habitable. But we have some basic conditions.

One of the first conditions that defines a habitable planet is that the surface of the planet receives enough radiation from the sun to be the right temperature to sustain liquid water. Then there’s Earth’s magnetic field, which shields the Earth from high-energy particles from the sun that could potentially strip away our atmosphere, exposing Earth’s surface to space weather elements. So you need liquid water, you need an atmosphere and you need a magnetic field.

Q: What can we learn from studying these new planets?

Shkolnik: I think it will add to our body of knowledge of how common Earth-sized planets are, and particularly Earth-sized size planets in habitable zones.

Q: What is most exciting about this discovery?

Shkolnik: I think it’s going to be the first of many discoveries like it. With anything in astronomy, if you find one, there’s probably many more. I think it confirms what we already learned from the Kepler space mission, that planets around these low-mass stars are ubiquitous, including habitable-zone planets. So this is really just the beginning.

Top photo: Artist illustration of the possible surface of TRAPPIST-1f, one of the newly discovered planets in the TRAPPIST-1 system. Scientists using the Spitzer Space Telescope and ground-based telescopes have discovered that there are seven Earth-size planets in the system. Credit: NASA/JPL-Caltech