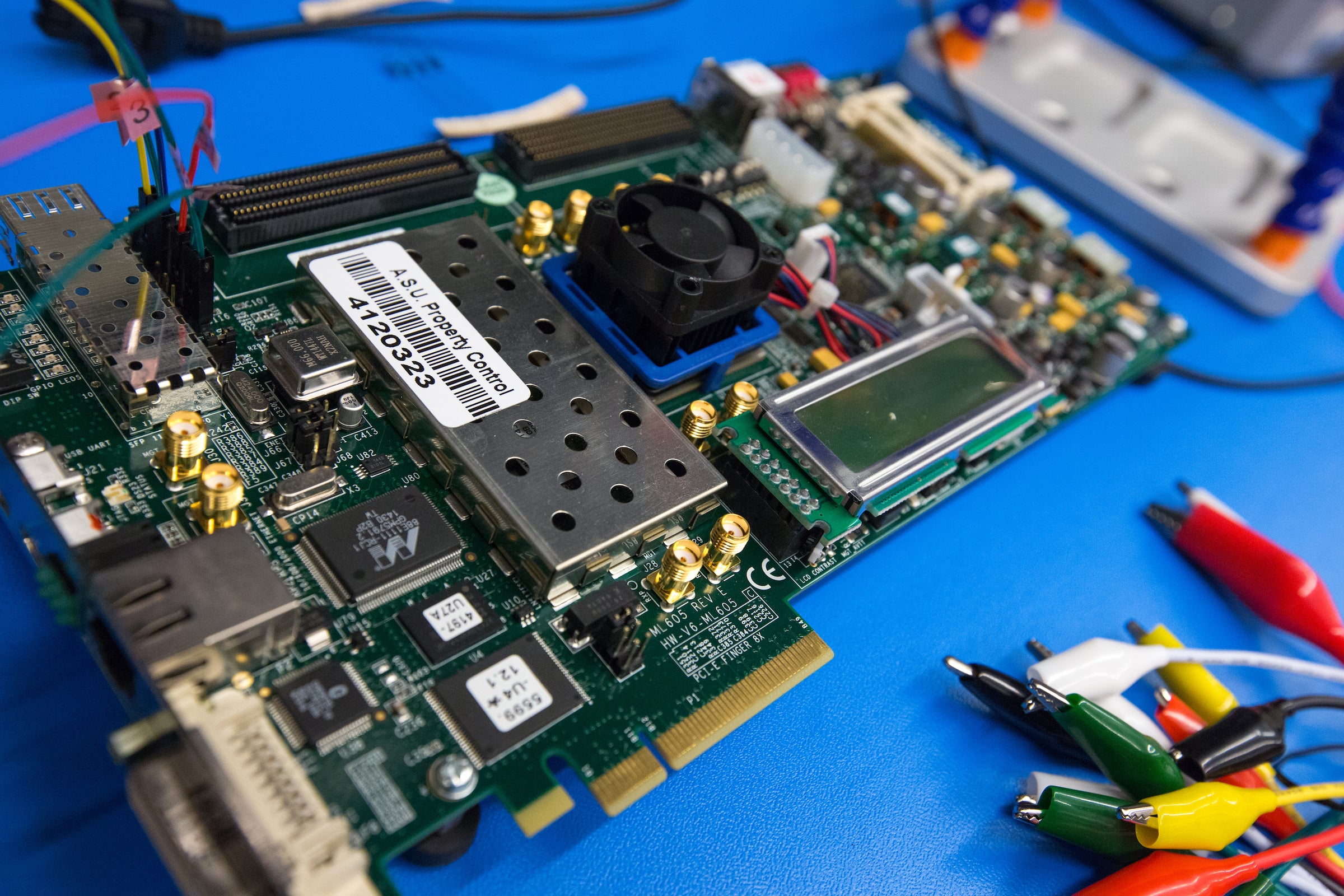 About two years from now, the most powerful rocket ever built will roar off from the Florida coast. Carrying a new spacecraft built for humans on a test voyage, it will claw into low Earth orbit before the upper stage separates from the core and fires itself towards the moon.

Once headed toward the moon, the Orion spacecraft will disengage from the engine that sent it into deep space. When it’s safely away, the engine will spit out 13 cubesats, which will make their own way to the moon. One of them is being built at Arizona State University.

It’s a lot of firsts. It’s the first time cubesats — spacecraft that can be about as small as a Rubik’s cube — will go interplanetary, and the first time a mothership will carry a number of spacecraft along on secondary missions.

“In the future, (NASA is) going to say, ‘You want to go to Venus? When we’re at Venus, we then deploy 13 separate missions,’” said ASU planetary geologist Craig Hardgrove. “And this is kind of the test case for this.”

It’s also the first NASA mission won by ASU, bestowed a year ago. The university has taken part in 25 missions to eight planets, three asteroids, two moons and the sun, but always as a guest, never a host. Because of their small size and relatively low cost, cubesats are bringing space within reach of universities and private institutions.

And it’s the first NASA mission for Hardgrove, an assistant professor in the School of Earth and Space Exploration.

“It’s a trip,” he said. “It’s been a year of a lot of telecons, a lot of meetings, a lot of traveling to different places to meet with subcontractors who are providing the propulsion system, the reaction wheels and everything to make sure we’re all on the same page to get ready for the design reviews.” ASU planetary geologist and assistant professor Craig Hardgrove looks at an early version of the CubeSat shell as he talks about starting preliminary design and construction of the engineer development units, or brains, of the flight hardware for the cubesat Oct. 14 in Tempe. The final components will be smaller when the shoebox-size satellite is launched to the southern hemisphere of the moon in two years. Photo by Charlie Leight/ASU Now

Hardgrove flies almost as much as his spacecraft will. ASU’s cubesat will combine six small units into one, a 6U in space parlance. (To give you an idea of its size, if it was built he could carry it in an overhead bin.) To Boston and Colorado, to meet with subcontractors. To the Jet Propulsion Lab in Pasadena. To NASA centers, hither and yon.

About 50 people are working on LunaH-Map, the Lunar Hydrogen Polar Mapper. It’s a tiny operation compared with typical NASA missions. And the usual prime contractors, the Lockheeds and Boeings, aren’t interested because a $2 million mission isn’t worth their time.

“They don’t want to build one-off solar arrays for a cubesat,” Hardgrove said. “And they’re not going to charge what we can pay them. So the traditional players are out.”

“It’s a very different model,” he added later, “for how a spacecraft gets built.”

A NASA mission led by a principal investigator — the holder of a grant administered by a university and the lead scientist; in this case, Hardgrove — has a number of built-in review steps. LunaH-Map passed its mission concept review (how and what they want to achieve) and a preliminary design review. The team is proceeding cautiously.

“You come out with a bunch of lists of things to improve and work on over the next few months, which is what we want,” Hardgrove said. “So I’ve asked them to put as critical an eye as you possibly can on this, because that’s the only way we’re going to uncover the things that we don’t know we don’t know.”

Cubesats were created about 10 years ago as a classroom engineering exercise. Now they regularly fly in low Earth orbit. Internet stores sell parts or completely assembled cubesats. Hardgrove’s team can’t use those parts because LunaH-Map is going into deep space, where radiation would fry off-the-shelf components.

For now, all involved have met their schedules, made their deliveries, and passed their reviews. The Lunar Hydrogen Polar Mapper, or LunaH-Map, will orbit around the lunar poles 141 times during 60 days sniffing for hydrogen. Artist rendition by Sean Amidan

This is all new ground, for Hardgrove and for NASA. With a $500 million or a $2 billion mission, careers and lives can be on the line. With that much money and responsibility, it’s a very serious operation.

“It’s a completely different model for how to do a spacecraft mission,” Hardgrove said.

“The idea with cubesats is that you’re able to do this more often, you reduce the price. You can’t just reduce the price arbitrarily; you have to lose something. In our case, I think you lose mission certainty. You’re taking more risks. And so, if you’re OK with that, you’re OK with it getting better over time. Then you can reduce the costs and ideally you get more of these things happening.”

LunaH-Map will orbit around the lunar poles 141 times during 60 days sniffing for hydrogen, flying about 10 kilometers (about 6 miles) above the surface, transmitting what it finds back to Earth. Then, having done its job, it will crash into the south pole.

Its job is part of NASA’s hunt for water on the moon. If ice is discovered on the moon, water wouldn’t have to be hauled from Earth. Ice can be used for rocket fuel or to support a human push to Mars.

In the meantime, 2018 will be the year of the cubesat in space. If LunaH-Map or one of the other cubesats succeeds, motherships carrying independent secondary spacecraft will be standard NASA practice.

“When we do this in the future it will be these risky missions, but if you get data, it’s a great reward,” Hardgrove said. “If you lose it, OK. No risk to the primary mission, we’re still doing all that, but we learned something. We learned something how to make it better. And I think that’s exciting for NASA and a bunch of other groups. ... Hopefully, when this works or one of the other 13 works, these will the new type of small, or nanosat developers that NASA can work with to make these types of payloads.”

Top photo: Preliminary work is starting with an emulator for the radio, larger than the one that will be used in in the LunaH-Map cubesat, in a lab at ISTB4 on Oct. 14 on the Tempe campus. Photo by Charlie Leight/ASU Now