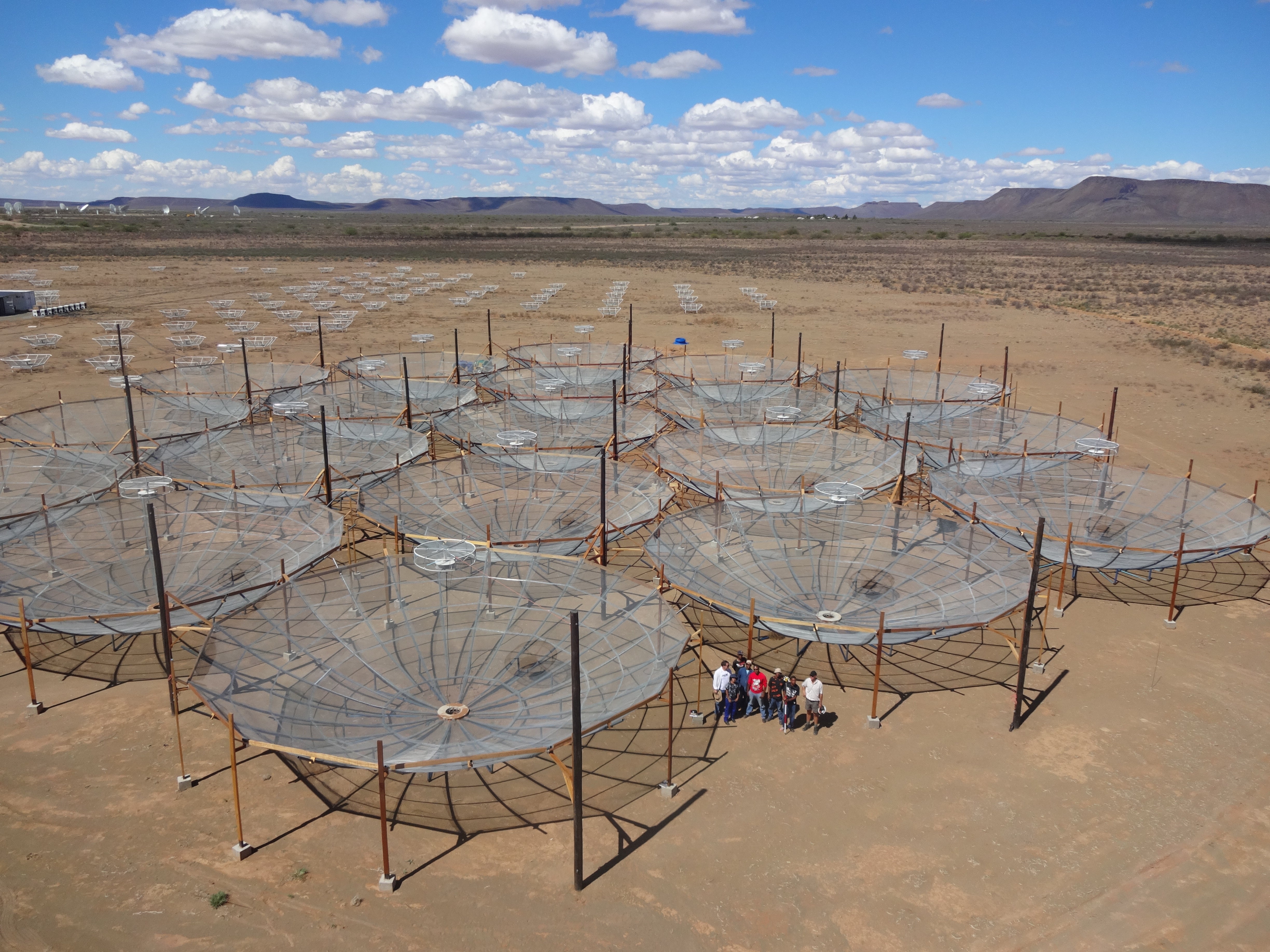 ASU astronomers to explore the ‘cosmic dawn’ of the universe

Thirteen billion years ago, nearly every particle in the universe was affected by a new phenomenon: the emergence of starlight from the birth of stars in the first galaxies.

Throughout the universe, primordial gas was turned into ionized plasma, setting the conditions for the universe we see today.

How did the laws of physics enable the primordial gas that followed from the Big Bang to evolve into today’s complex universe? How is our universe able to support life, stars, galaxies, planets, even black holes?

ASU’s cosmology group is seeking answers to these questions as part of an international experiment that has received nearly $10 million in funding from the National Science Foundation.

The experiment, an international collaboration called the Hydrogen Epoch of Reionization Array, or HERA, currently has 19 14-meter (42-foot) radio dishes aimed at the southern sky near Carnarvon, South Africa, and will soon up that number to 37 and then eventually to 240 by 2018.

“HERA builds on the lessons learned from two existing experiments, PAPER and MWA,” explained School of Earth and Space Exploration (SESE) associate professor and astronomer Judd Bowman, who is the project scientist for HERA.

“Over the last two years, the team has been applying those lessons to the design of HERA and testing prototype hardware on a small test array of 19 dishes. This additional funding will allow the team to begin HERA’s full-scale science program.”

ASU is a partner in HERA, which is led by the University of California, Berkeley. HERA will explore the first billion years of the universe, a period when hydrogen gas collapsed and led to the ignition of stars and galaxies throughout the universe.

Jacobs, the commissioning scientist for HERA, is leading much of the software development needed to process and transfer data from the remote site back to the U.S.

Jacobs will also be leading a team to South Africa this fall to aid in the construction and commission of the telescope. “We'll be getting HERA ready for the upcoming observing season when it will double in size and become more sensitive to potential cosmological signals.”

The HERA array, which could eventually expand to 350 telescopes, consists of radio dishes staring fixedly upwards, measuring radiation originally emitted at a wavelength of 21 centimeters — the hyperfine transition in the hydrogen atom — that has been stretched by a factor of 10 or more by the expansion of the universe since it was emitted some 13 billion years ago.

“We have learned a ton about the cosmology of our universe from studies of the cosmic microwave background, but those experiments are observing just the thin shell of light that was emitted from a bunch of protons and electrons that finally combined into neutral hydrogen 380,000 years after the Big Bang,“ said Aaron Parsons, A UC Berkeley associate professor of astronomy and principal investigator for HERA. “We know from these experiments that the universe started out neutral, and we know that it ended ionized, and we are trying to map out how it transitioned between those two.“

The strategy is to build a hexagonal array of radio dishes that minimizes the noise, such as radio reflections in the dishes and wires, that would obscure the signal. A supercomputer’s worth of field programmable gate arrays will cross-correlate the signals from the antennas to finely map a 10-degree swath of southern sky centered at -30 degrees latitude.

Using techniques adopted from PAPER and the MWA, the team will employ this computer-processing power to eliminate noise from the foreground astronomical radio sources in the band — 150-350 centimeters — to reveal the rapidly varying signal from neutral hydrogen as they tune across the radio spectrum.

Once astronomers understand the reionization process, they can use the new information to improve on other cosmological measurements. The reionized hydrogen gas around galaxies following reionization distorts signals from the oldest light in the universe — the cosmic microwave background (CMB) radiation. HERA will help astronomers correct for this distortion.

This will allow cosmologists, like SESE's Phil Mauskopf, to perform more precise searches with current and future CMB experiments for the signatures of primordial gravitational waves, which are predicted to have been produced when the universe expanded rapidly during the first fraction of a second of the Big Bang — a period known as inflation.

It will also help astronomers like SESE's Rogier Windhorst, James Rhoads and Sangeeta Malhotra, who are using other methods to directly observe the first galaxies responsible for the reionization of the hydrogen gas in the universe.

Other collaborators are the Harvard-Smithsonian Center for Astrophysics in Cambridge, Massachusetts, and the University of KwaZulu Natal in Durban, University of Western Cape in Cape Town and Rhodes University in Grahamstown, all in South Africa.