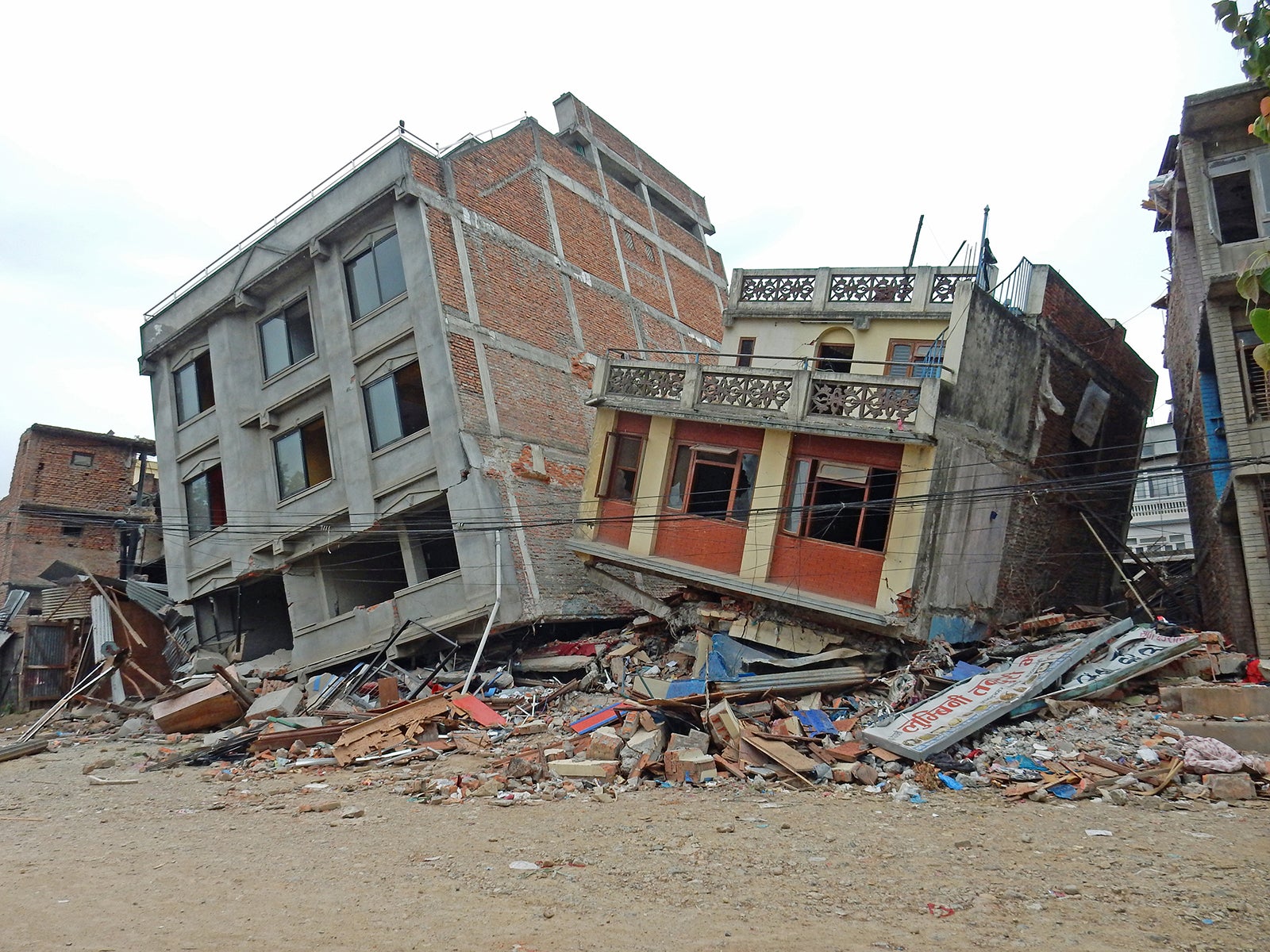 The April 2015 Gorkha earthquake in Nepal killed more than 8,000 people and injured more than 21,000. With a magnitude of 7.8, it was the worst natural disaster to strike Nepal since the 1934 Nepal-Bihar earthquake.

Researchers Kelin Whipple, Manoochehr Shirzaei, Kip Hodges, and Ramon Arrowsmith of ASU’s School of Earth and Space Exploration were quick to begin analyzing the data from this quake. Their findings have been recently published in Nature Geosciences.

The earthquake triggered numerous rock slides and avalanches, including one that obliterated the mountain village of Langtang, leaving few survivors. Elsewhere, entire villages were flattened by intense shaking, leaving thousands of people homeless and many hundreds missing.

“The days immediately after the earthquake were intense. We were very stressed by the rising death toll, and concerned for the many Nepalese guides and researchers we had worked with over the years,” Whipple said.

Despite the well-known association between seismic activity and mountain ranges, the Gorkha earthquake actually worked against long-term mountain building by uplifting the foothills and down-dropping the mountains. By studying this event and its counter-intuitive outcome, ASU researchers shed new light on the mechanisms of mountain building.

The Himalaya, the most dramatic mountain range on Earth, is a manifestation of the ongoing collision between India and Asia. Exactly how the Himalaya were built, however, has long been debated.

The conundrum is that major thrust faults that accommodate convergence between tectonic plates are usually relatively flat, tilted no more than a few degrees from horizontal, and thus do not produce much uplift.

How, then, can we explain the existence of dramatic mountain ranges like the Himalaya?

Some collisional mountain ranges grow because there are “ramps” or steep segments on major thrust faults that produce the rock uplift that builds high topography.

In the Himalaya, the region of high topography is set back some 80 kilometers north of the active frontal thrust, leading to the conventional wisdom that the Himalaya grow by slip on a ramp beneath the High Himalaya. Whipple and colleagues realized that the Gorkha earthquake, while tragic, provided an opportunity to test this hypothesis. A 3-D perspective view (to the northwest) of the Nepal Himalaya from Google Earth (2x vertical exaggeration). India is thrust under the Himalaya at the active frontal thrust. A key debate has been whether this thrust steepens under the High Himalaya or if there is a second active fault at the foot of the High Himalaya (dashed line), as argued by ASU researchers.

Satellite data provide clues to how the Himalaya were built

Even when seismic ruptures occur ~10 kilometers beneath the surface, as was the case of the Gorkha event, an earthquake causes patterns of deformation (uplift, subsidence and lateral shifts) that can reveal the geometry of the fault surface, or surfaces, involved.

“Within hours of the event, it was clear from seismic data that the main rupture had occurred on a gently sloping thrust fault, but just 10 days later InSAR data was suggesting a more complex scenario — and a possible resolution of an old debate,” said Whipple.

ASU researchers modeled these changes to show that the major active thrust fault remains relatively flat underneath the High Himalaya, inconsistent with the existence of the ramp often hypothesized to explain uplift of the range. This is fundamentally why the Gorkha earthquake actually uplifted the foothills and down-dropped the mountains.

The earthquake uplifted the foothills around Kathmandu (KTM) (warm colors) and down-dropped the High Himalaya (cool colors), except for the highlighted uplift anomaly associated with slip on the secondary thrust. Elevation change determined by InSAR. Epicenters of the mainshock and three large aftershocks shown with red stars.

So how are the Himalaya built?

With the newly collected data, the researchers could see, in exquisite detail, physical evidence of a likely secondary rupture during the earthquake and its aftershocks that actually uplifted a portion of the High Himalaya northeast of Kathmandu. The secondary fault implicated is directly analogous to the fault responsible for the devastating 2005 Kashmir earthquake that claimed more than 85,000 lives in Pakistan.

It appears that slip on this structure, and perhaps others like it, may contribute more to the continued growth of the mountains than large ruptures on the main active thrust fault. Interestingly, steep secondary thrusts may develop in response to rapid erosion focused in the High Himalaya.

Ultimately, these findings not only provide a greater understanding of the mountain building process, they also may help anticipate seismic hazards in advance of devastating earthquakes by improving our ability to remotely identify active faults.

“To those that live at the foot of the Himalaya and other tectonically active mountain ranges, understanding the seismic hazard is of tantamount importance,” said Whipple.

Top photo: Earthquake damage in Kathmandu from the 2015 Nepal earthquake. Photo by Superikonoskop via Wikimedia Commons