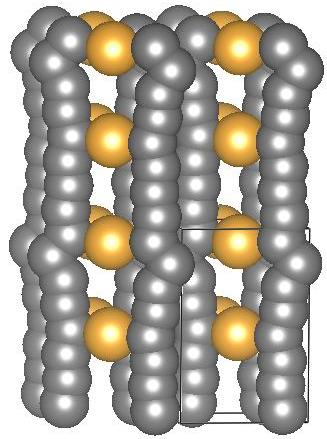 Do diamond and graphite really have a cousin made of chains of carbon?

Carbon, one of the most common elements and the basis for all life, is considered to be the most important and versatile of all elements. The various forms of carbon have yielded two Nobel Prizes in the last two decades, for fullerenes in 1996 and graphene in 2010.

Carbon can form as diamond and graphite, respectively the hardest and softest of known materials. Could a linear form of carbon, called carbyne, also occur as a stable solid? The debate among chemists is heated.

A new paper, published in the Journal of Physical Chemistry Letters, boldly discredits a recent report of carbyne synthesis. In the process, the authors propose a new class of materials.

The debate, highlighted recently in Chemical and Engineering News, involves researchers at Sun Yat-sen University (Guangdong, China), who reported that they had made carbyne, with the help of gold.

While the Sun Yat-sen University scientists concluded that gold was not integrated into the crystals, and that they therefore produced carbyne, the ASU researchers and Kroto argue that the data were misinterpreted.

Employing high-level calculations, they showed that, instead, gold is an integral component of the crystals synthesized in China and thus that they did not produce carbyne.

Carbyne: A history of the debate

Long chains of carbon are among the largest molecules in interstellar space. The experiments that led to the discovery of fullerenes and the Nobel Prize to Harry Kroto, Robert Curl, and Rich Smalley, were designed to understand these space molecules.

If the chains of carbon form into crystals, the material is called carbyne. This one-dimensional form of carbon has been sought by experimentalists since the 1960’s.

Recent theoretical work suggests that carbyne crystals, assuming they exist, would possess important mechanical and electrical properties. This has led to a resurgence of experimental efforts to isolate crystalline carbyne, although no reproducible experiments to produce such crystals exist.

The next step for the ASU researchers is to do experiments to produce the proposed new compounds containing carbon and gold since these could potentially open a new area of materials research.

First we have to establish that they are real, says Buseck, “and then we can determine if their properties are as interesting as predicted.”

Top image: A crystal structure of gold-stabilized carbon chains proposed by Tarakeshwar, Kroto and Buseck. The box shows the unit cell of the “pseudocarbyne.” Image by Pilarisetty Tarakeshwar