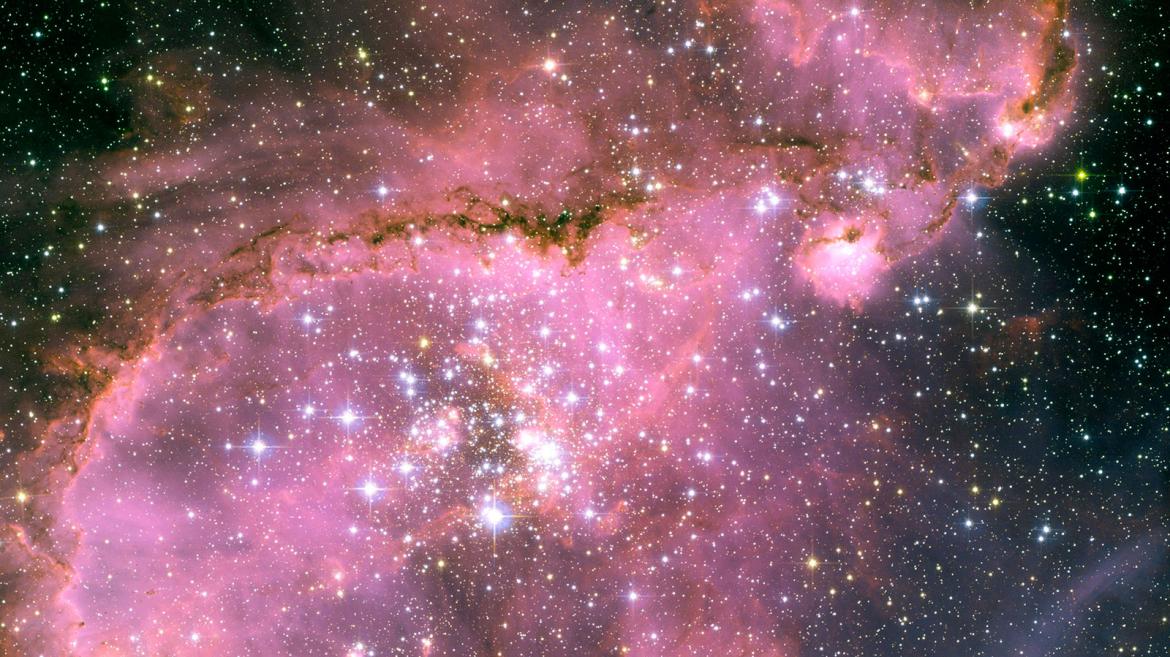 “Being selected for an NESSF award is a mark of distinction,” says School of Earth and Space Exploration (SESE) assistant professor Manoochehr Shirzaei. “Many of the previous recipients of this fellowship have emerged as leaders in their scientific communities.”

Emilie Dunham is holding a piece of Canyon Diablo at the Center for Meteorite Studies Booth at the 2016 Phoenix Comicon. Photo by Cameron Mercer/ASU

Emilie Dunham, a graduate student in geological sciences, will use her fellowship to continue to gain an understanding of the astrophysical environment in which our Solar System was born.

“Emily is an incredibly talented analyst and budding scientist, and represents the best of our graduate students here in SESE,” says SESE professor Meenakshi Wadhwa.

Sam Gordon, a graduate student in astrophysics, is currently a team member on a collaborative experiment called BLAST-TNG (Balloon-borne Large Aperture Sub-millimeter Telescope - The Next Generation). This large telescope will fly on a NASA balloon from Antarctica in December 2017 to peer into star forming regions called molecular clouds.

After completing his Ph.D., Sam says he “plans to continue contributing to experiments that push the limits of our knowledge of the physics of the universe, what makes it tick, and how we fit into the whole picture.”

Chuhong Mai, a graduate student in astrophysics, will use the fellowship to devote her attention to how Earth-like planets may acquire, and even retain, hydrogen-rich atmospheres from the proto-planetary disks in which they form. The results of her proposed modeling efforts will integrate studies of exoplanets and terrestrial geochemistry.

“I am thrilled that Chuhong succeeded in securing one of these very competitive fellowships,” says SESE professor Steven Desch. “Out of 180 applications nation-wide, only 28 were selected for funding.”

Megan Miller explores a road-cut as part of a sedimentology lab. Photo by Sarah Robinson

For Megan Miller, a graduate student in geological sciences, this fellowship will allow her to use satellite radar imagery to observe land subsidence due to the removal of Arizona’s groundwater, then rigorously analyze and interpret the data in an effort to improve our understanding of the aquifer systems and associated hazards.

Megan, a former stock broker, is also the recipient of a 2016 National Science Foundation East Asia and Pacific Summer Institutes for U.S. Graduate Students (EAPSI) award. She is spending eight weeks this summer studying the effects of the 2010-2011 Canterbury earthquake sequence on the storage properties of the Christchurch, New Zealand groundwater system.

The NASA Earth and Space Science Fellowship (NESSF) program awards students from accredited U.S. universities on behalf of individuals pursuing Master of Science or Doctoral degrees in Earth and space sciences, or related disciplines. The purpose of NESSF is to ensure continued training of a highly qualified workforce in disciplines needed to achieve NASA’s scientific goals.