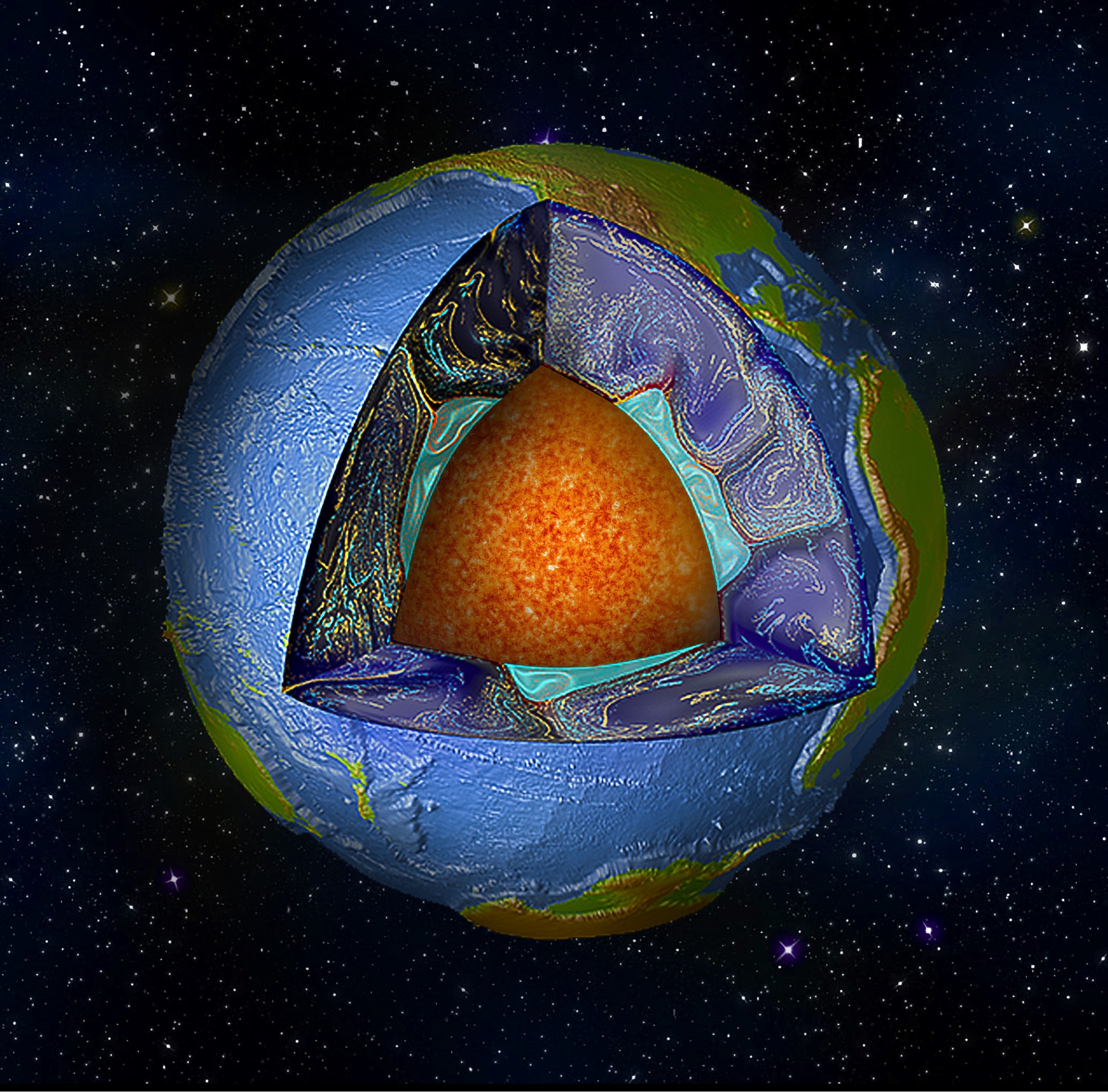 Giant blobs of rock, deep inside the Earth, hold important clues about our planet

Two massive blob-like structures lie deep within the Earth, roughly on opposite sides of the planet. The two structures, each the size of a continent and 100 times taller than Mt. Everest, sit on the core, 1800 miles deep, and about halfway to the center of the Earth.

Arizona State University scientists Edward Garnero, Allen McNamara and Sang-Heon (Dan) Shim, of the School of Earth and Space Exploration, suggest these blobs are made of something different from the rest of Earth’s mantle. The scientists’ work appears in the June issue of Nature Geoscience.

“While the origin and composition of the blobs are yet unknown,” says Garnero, “we suspect they hold important clues as to how the Earth was formed and how it works today.”

The blobs, he says, may also help explain the plumbing that leads to some massive volcanic eruptions, as well as the mechanism of plate tectonics from the convection, or stirring, of the mantle. This is the geo-force that drives earthquakes.

Earth is layered like an onion, with a thin outer crust, a thick viscous mantle, a fluid outer core and a solid inner core. The two blobs sit in the mantle on top of Earth’s core, under the Pacific Ocean on one side and beneath Africa and the Atlantic Ocean on the other.

Waves from earthquakes passing through Earth’s deep interior have revealed that these blobs are regions where seismic waves travel slowly. The mantle materials that surround these regions are thought to be composed of cooler rocks, associated with the downward movement of tectonic plates.

The blobs, also called thermochemical piles, have long been depicted as warmer-than-average mantle materials, pushed upward by a slow churning of hot mantle rock. The new paper argues they are also chemically different from the surrounding mantle rock, and may partly contain material pushed down by plate tectonics. They might even be material left over from Earth’s formation, 4.5 billion years ago.

Much is yet to be learned about these blobs. But the emerging view from seismic and geodynamic information is that they appear denser than the surrounding mantle materials, are dynamically stable and long-lived, and have been shaped by the mantle’s large-scale flow. The scientists expect that further work on the two deep-seated anomalies will help clarify the picture and tell of their origin.

Says Garnero, “if a neuroscientist found an unknown structure in the human brain, the whole community of brain scientists, from psychologists to surgeons, would actively pursue understanding its role in the function of the whole system.”

“As the thermochemical piles come into sharper focus, we hope other Earth scientists will explore how these features fit into the big puzzle of planet Earth.”

Top image: Cutaway of the Earth’s surface, down to the liquid core. A numerical convection experiment shows blobs in green, surrounding mantle rock in blue, and former oceanic crust from the surface that has subducted into the interior in yellow. Image courtesy of Dr. Mingming Li/University of Colorado