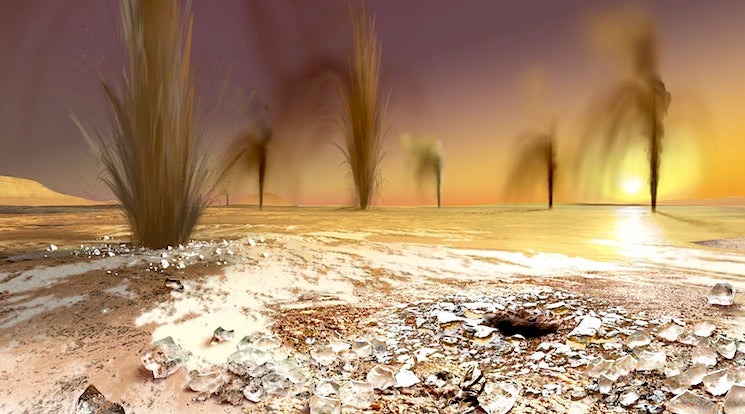 This week 15 years ago, NASA launched a spacecraft with the name 2001 Mars Odyssey, and onboard was the Thermal Emission Imaging System (THEMIS), a multi-wavelength camera designed at Arizona State University.

Odyssey arrived at Mars in October 2001, and spent three months using carefully controlled dips into the upper atmosphere of Mars to adjust the size and shape of its orbit in preparation for systematic mapping of the Red Planet.

Both spacecraft and camera have been outstandingly successful. Not only has Odyssey been operating longer than any other spacecraft ever sent to Mars, but during Odyssey's lifespan so far, all six subsequent NASA missions sent to Mars have also succeeded.

For its part, THEMIS has taken nearly half a million images of Mars in five visual and nine infrared (heat-sensitive) "colors." Researchers have mosaicked these into the best image-maps of Mars ever made both in daytime and nighttime infrared, as well as the most complete map of Martian surface properties. The data from THEMIS has also played a large role in introducing students to the excitement of scientific research.

"In 15 years of imaging Mars, we've made major discoveries as we followed the Red Planet through all its seasons for more than six Mars years," says ASU professor Philip Christensen, the instrument's designer and principal investigator. He is Regents Professor of Geological Sciences and the Ed and Helen Korrick Professor in ASU's School of Earth and Space Exploration.

"In that time we've learned what Mars is made of, and how many of its processes work," he says. THEMIS images helped NASA select landing sites for the twin Mars Exploration Rovers Spirit and Opportunity, the Mars Science Laboratory rover Curiosity, and the non-roving Mars Phoenix lander. Its maps of rocks and dust are helping engineers find a safe and scientifically productive landing place for 2018's non-roving InSight lander and the Mars 2020 rover.

Images and data from THEMIS positively identified long-suspected water ice in the south polar ice cap, and they also led to the discovery of powerful dust-laden jets of CO2 gas that erupt at the south polar cap every spring.

THEMIS and Odyssey have also played an important role back on Earth, Christensen explains.

"Over the course of the mission so far," he says, "we have trained dozens of graduate students who have taken their PhDs out into the world, where they are teaching others and making discoveries of their own. We have educated thousands of ASU undergraduates in the basics of a planet that's both like and unlike Earth. And literally tens of thousands of secondary school students around the country have been introduced to the excitement of scientific research using THEMIS images."

The mission's longevity is no accident, says Odyssey project scientist Jeffrey Plaut of NASA's Jet Propulsion Laboratory in Pasadena, California. "In addition to the quality of this spacecraft, the careful way it is operated has been crucial to how it has stayed so productive so long." He notes, "Odyssey was designed for a four year mission. We're in the 15th year, and it keeps doing everything we ask it to do."

"THEMIS will continue its scientific work as long as Mars Odyssey continues," says Christensen. "THEMIS and Odyssey predate the creation of ASU's School of Earth and Space Exploration. But they and other Mars-dedicated spacecraft have provided a wonderful data heritage for scientists, researchers, and students, now and into the future."

Top image: Sand-laden jets shoot into the Martian polar sky in this artist's view. THEMIS images and data led scientists to discover these jets were the source of mysterious dark makings that appeared every spring on the south polar cap of Mars. Image Credit: Arizona State University/Ron Miller

Side image: Shortly after sunrise local time, light blue clouds fill Coprates Chasma on Mars, part of Valles Marineris, the vast "Grand Canyon of Mars." The clouds are mostly ice crystals and appear blue in color because they scatter blue light more strongly than other colors. In Coprates, the valley floor lies about 33,000 feet (10,000 meters) deeper than the flat canyon rim. This image was made November 25, 2015, by the Thermal Emission Imaging System (THEMIS) using its visual-light and near-infrared filters, and it is approximately true in color. A shift in local time for the spacrcaft's orbit is letting THEMIS focus on transient atmospheric phenomena in addition to geological studies. Image credit: NASA/JPL-Caltech/Arizona State University