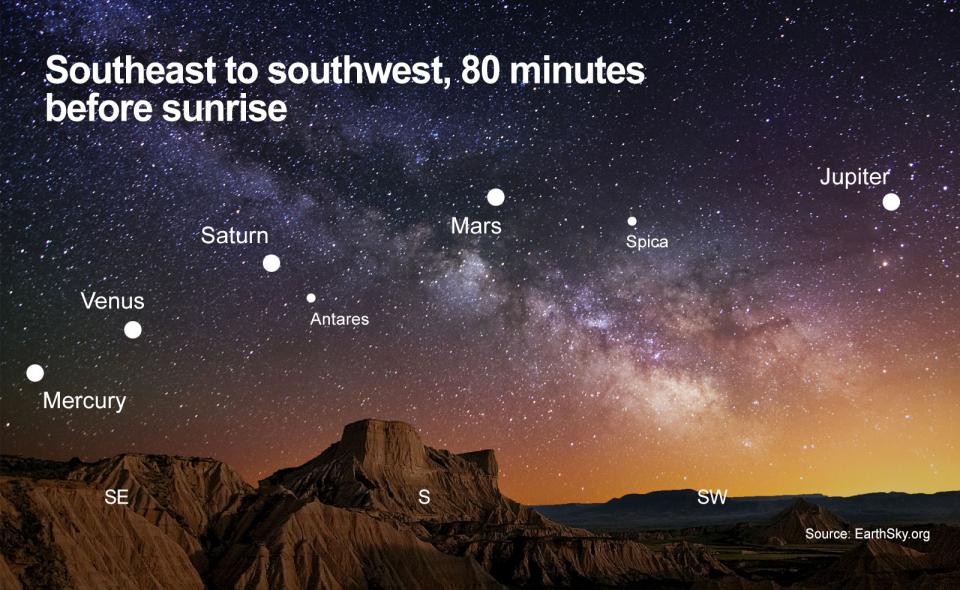 Have you made it up before dawn to see the alignment of five planets in the skyline? If not, don’t worry — the best is yet to come, according to Arizona State University scientist Rogier Windhorst.

The morning alignment is visible through Feb. 27, though the moon will be crashing the party through Feb. 6. Some photo hounds might like the lunar juxtaposition, but Windhorst said the planets will be easier to see when the moon — and its glow — moves on to the other side of the sky. He recommended viewing the rare sky show Feb. 7 or later.

The five-planet lineup — Mercury, Venus, Saturn, Mars and Jupiter — happens only about once a decade.

“We don’t actually discuss this in our labs, because it’s so rare an event, but my TAs and I are talking about making this an extra credit,” said Windhorst, a Regents’ and Foundation Professor of astrophysics in the School of Earth and Space ExplorationThe School of Earth and Space Exploration is a unit of ASU's College of Liberal Arts and Sciences. and James Webb Space Telescope interdisciplinary scientist who teaches many of the labs for AST: 114: Astronomy Lab II.

No fancy equipment is needed (other than a good alarm clock) to see the five planets, but Windhorst said a pair of binoculars will make it easier to view Mercury.

For those who want additional reference materials, a star chart (around $3) and the National Audubon Society’s “Field Guide to the Night Sky” ($21.95) are the materials students use in his astronomy labs, and are available at the ASU Bookstores. Windhorst's lab website also offers a number of resources in the "Links" section.

Windhorst said those who live in the East Valley have an advantage — “Get up at 5, drive half an hour east toward the Superstitions, get off at Sossaman and drive toward Queen Creek; you’ll have a much stronger chance of seeing it” — but anyone in Arizona can enjoy the state’s advantages.

“Arizona is — there’s competition from Hawaii — but Arizona is still called the astronomy capital of the U.S.,” Windhorst said. “Our desert environment offers some neat advantages: 3,400 to 3,600 hours of sunshine a year, an average of 10 hours a day. Which means you get almost the same fraction of clear sky — though that’s not entirely true anymore because of climate change.”

Some of the cities in Arizona have made big strides toward protecting the skies. Windhorst in particular praised the efforts by Tucson and Flagstaff to switch to sodium (yellow) lights, which cause less light pollution interference.

“Dark skies, like clean air and clean water, are very precious. Once you lose it, you can almost never get it back,” Windhorst said.

ASU offers a number of resources for skygazers: among them, the Marston Exploration Theater on the Tempe campus, which offers a range of 3-D astronomy shows; the annual Earth and Space Exploration Day; and the upcoming ASU Night of the Open Door, when all of the campuses roll out the welcome mat for visitors.

For those who want to put an eye to a telescope, graduate students from the School of Earth and Space Exploration welcome the public to a free monthly open house in Tempe that includes several hours of telescope viewing, weather permitting. The next one is from 7 to 10 p.m. Friday, Feb. 5 (telescopes open from 8 to 10 p.m.) and will feature lectures about ASU research in the Himalayas and launching balloon experiments in Antarctica.

Windhorst, whose group at ASU has contributed significantly to unraveling the formation and evolution of distant galaxies with the Hubble Space Telescope, said familiarity with the skies is important for everyone, not just those in science careers.

The new NASA telescope, the James Webb Space Telescope, will focus on that, Windhorst said. He has been involved with that project since 2001 and said the telescope will study the first galaxies and be very good for characterizing exoplanets.

“To understand global warming … someday we’ll be able to measure carbon dioxide with telescopes like James Webb. Venus has excess carbon dioxide, which is natural. But much of our carbon dioxide is human-made — [it’s important] to look at planets to see where life can be sustained, and for long enough to develop intelligent life. And that’s not such a simple question.”