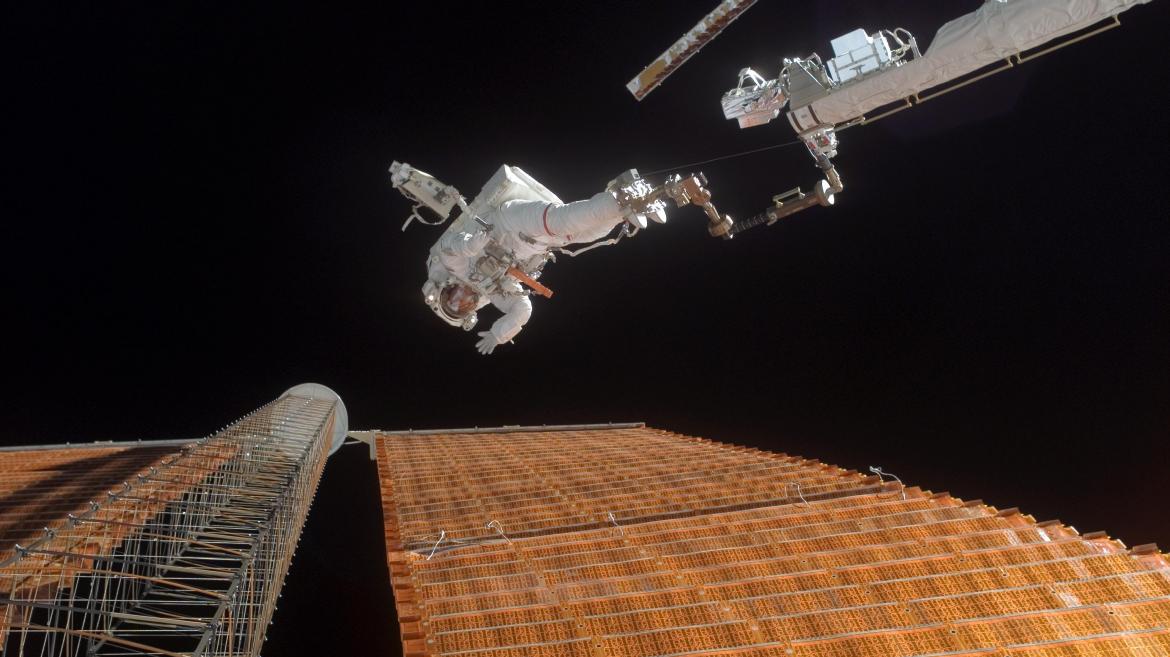 “Frequent travel may be required,” the job description understates.

NASA announced in early December that it’s hiring another round of astronauts. To help Arizona State University students gain an edge in applying for the job, the School of Earth and Space Exploration (SESE) and ASU’s NewSpace Initiative held a coaching session this week for prospective starmen and women.

ASU’s resident astronaut, Scott Parazynski, a University Explorer and professor of practice in the School of Biological and Health Systems EngineeringThe School of Biological and Health Systems Engineering is part of the Ira A. Fulton Schools of Engineering at ASU., conducted the session. With a 17-year career in the astronaut corps that included five space shuttle flights and seven space walks — one of which is considered to be the most difficult and dangerous ever conducted — under his belt, Parazynski (pictured above) offered an expert’s views to the 30 students in attendance.

“There’s no secret formula to being selected to be an astronaut,” Parazynski said.

ASU resident astronaut Scott Parazynski speaks to students Wednesday on how best to apply to NASA to become an astronaut. Photo by Charlie Leight/ASU Now

It’s more a matter of being noticed. Do you run ultramarathons and have two doctorates? People who have worked on complex projects as part of a team in remote or extreme environments will have an edge.

“You really have to toot your own horn,” Parazynski said. “What they’re looking for is ‘Would I spend six months in a tin can with this person?’ ”

Competition for one of the world’s most sought-after jobs is intense, to put it mildly. In 2013, more than 6,000 people applied to the program. Only eight were selected. About 10,000 people will apply this year, Parazynski estimated.

Wednesday’s session was about making the first hurdle, not about passing the huge battery of tests that come later. Although the application declares a bachelor's degree in engineering, biological science, physical science, computer science or mathematics is adequate, Parazynski said honestly most astronauts have doctorates, with a few holding master’s degrees.

He reminded students that NASA isn’t the only game in town anymore.

“All of you ought to look very broadly at space,” he said. While NASA will be going to deep space, shuttles to the International Space Station and space tourism flights also will require astronauts. XCOR Space Expeditions requires all employees to fly at least once.

“My hunch is they’ll be looking for SESE grads in the future,” he said, citing the transdisciplinary nature of degrees offered by the school, which is part of the College of Liberal Arts and Sciences.

Marc Neveu, a postdoctoral researcher with a Ph.D. in astrophysics, attended the session.

“Being an astronaut has always been a dream of mine,” Neveu said. “Just to see the Earth from space … seeing your planet from space would be incredible.”

As a French citizen, Neveu is ineligible to fly for NASA, but there is always the European Space Agency and private space companies like SpaceX and Blue Origin.

t’s an incredible amount of hard work, but it’s worth all the sacrifice, Parazynski said.

“Space walking is the ultimate astronaut experience,” he said. “I miss it.”

To apply for astronaut candidate: https://www.usajobs.gov/GetJob/ViewDetails/423817000

Top photo: While anchored to a foot restraint on the end of the Orbiter Boom Sensor System, astronaut Scott Parazynski (now ASU's University Explorer) assesses his repair work as the solar array is fully deployed during the STS-120 mission's fourth space walk on Nov. 3, 2007, while Space Shuttle Discovery is docked with the International Space Station. During the seven-hour, 19-minute spacewalk, Parazynski cut a snagged wire and installed improvised stabilizers designed to strengthen the damaged solar array's structure and stability in the vicinity of the damage. Photo by NASA