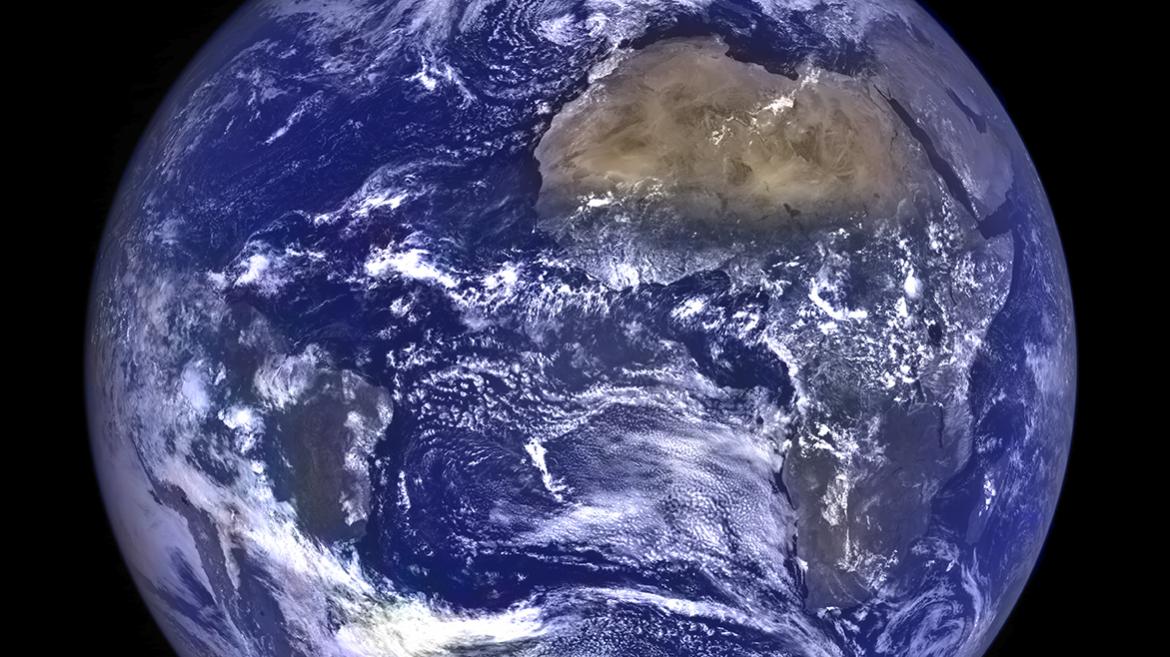 NASA has released a richly textured image of the Earth taken by the Lunar Reconnaissance Orbiter using cameras operated by Arizona State University.

The new image shows the suface of the Moon in the foreground, with Africa, the south Atlantic Ocean and the eastern edge of South America in the spotlight. The large tan area on the upper right is the Sahara Desert, and in the foreground on the Moon, we glimpse Compton Crater.

A "Full Earth" straddles the edge of the Moon, as seen from lunar orbit above Compton Crater in the foreground. On Earth, Africa is visible at center right, and South America can be glimpsed through clouds at left. Photo by NASA/GSFC/Arizona State University

Mark Robinson, a professor in ASU's School of Earth and Space Exploration, is the principal investigator for the Lunar Reconnaissance Orbiter Camera (LROC) on the NASA spacecraft. He is in charge of LROC's Science Operations Center on ASU's Tempe campus.

At his direction, the LROC recently captured this unique view of Earth from the spacecraft's vantage point in orbit around the Moon. Because the spacecraft is moving, it can see both Earthrises and Earthsets — something someone standing on the Moon wouldn't be able to.

"On Earth, moonrise and moonset are always inspiring moments," Robinson said. "However, lunar astronauts will witness something very different. As seen from the lunar surface, Earth never rises or sets."

The Moon's rotation is locked by tidal forces, Robinson explained, which keeps one side of the Moon always facing toward Earth.

"This means that if you are standing on the Moon, Earth always hangs in the same spot in the sky, varying only a small amount," he said.

The latest image was composed from a series of images taken Oct. 12, when LRO was about 83 miles above the moon's surface.

"The image is simply stunning," said Noah Petro, deputy project scientist for the Lunar Reconnaissance Orbiter at NASA's Goddard Space Flight Center in Greenbelt, Maryland. "The image of the Earth evokes the famous 'Blue Marble' image taken by astronaut Harrison Schmitt during Apollo 17, 43 years ago, which also showed Africa prominently in the picture."

This is no simple space selfie. The manuever involved the spacecraft rolling 67 degrees to the side and then slewing with the direction of travel to maximize the width of the horizon — while traveling faster than 3,580 miles per hour.

Then there's a bit of special processing needed, in which the information is combined from both the high-resolution Narrow Angle Camera (NAC, which takes black-and-white images) and the lower-resolution Wide Angle Camera (WAC, which does color).

"Since the spacecraft, Earth and Moon are all in motion, we had to do some special processing to create an image that represents the view of the Earth and Moon at one particular time," Robinson said.

"In the final Earth image, the WAC provides the color and the NAC provides high-resolution detail."

The Earth may not move across the lunar sky, Robinson says, but the view is hardly static.

"Future astronauts will see continents rotate in and out of view, and the ever-changing pattern of clouds will always catch one's eye — at least for those on the lunar side that faces Earth."

Find more images and technical details on the LROC website at lroc.sese.asu.edu/posts/895.

The School of Earth and Space Exploration is a unit in ASU's College of Liberal Arts and Sciences.