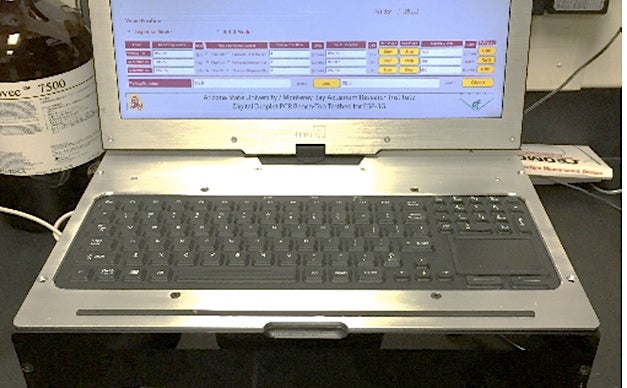 Until recently, it took hours – sometimes days – to analyze biological samples after they were frozen in the field and brought back to the laboratory. But now there is a faster, cheaper and smaller way for researchers to bring gold-standard analysis to the field.

Researchers from Arizona State University’s School of Earth and Space Exploration have combined their sensors, biotechnology and instrumentation expertise to develop a portable, autonomous device that analyzes trace elements.

The highly miniaturized microbial analysis machine, called the ddPCR Bioanalytical Field Instrument, allows researchers to do things such as detect microbes in water, soil and the upper atmosphere. ASU photo

The machine, which was recently highlighted in a Nature Methods article, is portable, exceptionally low-power, robust enough for long-term field deployment, doesn't require cleaning, and is easy to deploy and operate.

Developed by a team led by experimental physicist Cody Youngbull, assistant research professor in the School of Earth and Space Exploration, the technology was originally intended for deployment on an Autonomous Underwater Vehicle platform as part of a project to map the dynamic microbial diversity in the world’s oceans.

After four years of development and millions of dollars from the Gordon and Betty Moore Foundation, the National Science Foundation and the Monterey Bay Aquarium Research Institute, the instrument is now operational. It is being used at the Monterey Bay Aquarium Research Institute and the Southern California Coastal Water Research Project to detect microbial contaminants in water more rapidly, with better accuracy and lower limits of detection.

The device employs emulsion droplet technology, which means that the aqueous sample comes into the instrument and is coated in oil, thus keeping it from ever contacting the internal components. Once samples are loaded, reagents are mixed, processed and analyzed in perfect isolation. The data is then quantified directly in the field for immediate feedback. The small droplets enable the device to produce millions of copies of any specified DNA sequence in minutes.

With the emergent capability to perform this sort of analysis on an autonomous underwater vehicle, the device is quite adaptable to the needs of the researcher and has great potential for monitoring other locations in the field, including the built environment.

According to Youngbull, while it does have health applications since it is able to quantify pathogens, he doesn’t see it as a medical diagnostic tool.

“It’s designed for exploration,” he said. “Being able to detect trace components, single molecules, autonomously and reliably, without the need for sample return or hardware consumables in a really tiny, low-power package are what our machine is all about.”

Although there may be limited medical diagnostic applications, Youngbull envisions use of the device in homeland security, mass transit, public spaces, hospitals, schools, food production and combat theater analytics.

Autonomous, digital droplet PCR is useful for many aspects of science. The device might even one day be integrat­ed into a rover, lander or orbiter to seek out extant DNA in the water on Mars, the oceans of Europa, the ice plumes of Enceladus or wherever scientist-explorers one day hope to discover and quantify nucleic acid sequences.